FIRST READ ON PEP: Sam Milby files an estafa case against a private individual for allegedly taking P265,734 of his money and leaving his van unrepaired 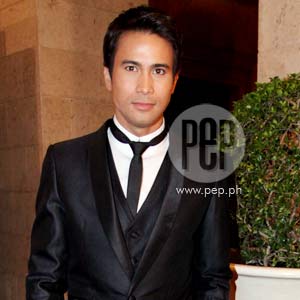 Actor Sam Milby filed an estafa case against a private individual at the Pasig City Prosecutor's Office yesterday, September 15, after the latter failed to return the money the actor gave him to repair his damaged van.

According to a document obtained by PEP (Philippine Entertainment Portal), Sam—whose real name is Samuel Lloyd Milby—filed the case against the private individual—whom we refer to here as the Respondent—because the man took Sam's money for repairs that he never did on the actor's Toyota Grandia van.

Sam's vehicle was heavily damaged after he figured in a vehicular accident along Libis, Quezon City, last October 4, 2009.

In his 13-page complaint-affidavit, Sam said that he engaged the services of the Respondent to repair his van after the latter "bragged" that he could fix the actor's vehicle for a lower amount.

The Respondent also promised that the repair work "would be done by January 2010," or a period of a little over three months.

Sam, 26, then instructed his driver to bring his van to the Respondent's "purported address" in Ortigas, Pasig City.

The Respondent, according to Sam's account, accepted his vehicle for repair.

Sam added that the Respondent said he was going to take the van to his automotive shop, but did not disclose the address to Sam or to his driver.

In his affidavit, Sam noted that his arrangement with the Respondent was: "He would tell me how much he needed at any given time for the purchase of the parts needed for the total repair of my vehicle.

"Then I would give him checks payable to him or pay to cash for such purpose."

However, according to Sam, in the ensuing months the Respondent never gave him receipts as proof of purchases made, nor did he issue any document acknowledging receipt of checks received from Sam.

Sam also attached to his affidavit photocopies of the eight checks—which totalled P265,734—that he issued to the Respondent.

Then on January 2010, which Sam said was the deadline set by the Respondent, Sam followed up on the status of his van.

The Respondent told him that he needed more time to complete the job.

"During the months that passed, he continued to ask me for more time to finish the repair works," Sam said in his affidavit.

By April 5, 2010, or roughly six months after their transaction was made, Sam said he got "fed up" with the Respondent's promises.

At this point, he recounted in his affidavit, he called up the Respondent to confront him about the "slow progress of the repair works" on his vehicle.

The Respondent, still according to Sam, now promised to complete the repair work within two weeks.

Sam agreed to the Respondent's request "for the last time."

However, according to Sam, the Respondent had now turned off his mobile phone, leaving the actor unable to get in touch with him.

Sam's sworn affidavit claimed that the Respondent was "in hiding for one month."

One month later, or "around the second week of May 2010," Sam said he was again able to reach the Respondent through the latter's mobile phone.

In that conversation, the actor said, he now demanded that the Respondent return his van.

Also in that conversation, Sam said, he asked the Respondent for "the return of all money given to him for the repair of my vehicle, in the amount of approximately P260,000" or "the payment of the amount it would cost me to have the vehicle repaired by another person or entity."

The Respondent, Sam continued, again asked for more time to finish the repairs.

But the actor, now adamant about demanding the return of his Toyota Grandia, instructed his driver to retrieve it from the Respondent.

When Sam's driver returned to the condominium unit the following day, the Respondent took him to what the latter said was his shop in Tandang Sora, Quezon City.

It was there that Sam's driver got back Sam's vehicle.

But this time, Sam's affidavit said, he could see that very little had been done to repair his van: "The window shields were still broken, the paint job was negligible, and the damage from the accident was still very much visible."

On July 1, 2010, Sam's lawyers served a demand letter on the Respondent, telling him to return, within five days from receipt of the letter, the full amount given him by the actor.

On September 1, 2010, Sam got hold of the copies of the checks he had issued to the Respondent, which had been returned to his bank.

This is when Sam filed an estafa case against the Respondent.

The affidavit noted the provisions of Article 315(1)(b) of the Revised Penal Code:

"Swindling (estafa). - Any person who shall defraud another by any of the means mentioned hereinbelow shall be punished by:

"1. With unfaithfulness or abuse of confidence, namely:

"(b) By misappropriating or converting, to the prejudice of another, money, goods, or any other personal property received by the offender in trust or on commission, or for administration, or under any other obligation involving the duty to make delivery of or to return the same, even though such obligation be totally or partially guaranteed by a bond; or by denying having received such money, goods, or other property."

STATEMENT OF SAM'S CAMP. After PEP got a copy of Sam Milby's Complaint, we asked his camp to also issue a statement.

This is what his legal counsel, Atty. Joji Alonso, sent PEP:

"Sam filed an estafa case against a private individual yesterday.

"This pertains to the money received on various occasions, for the repair of Sam's van but which was never done.

"The money remains unaccounted for, despite repeated demands.

"The trust that Sam bestowed has been breached.

"It is hoped that Sam will obtain redress from the judicial system."