Christian Bautista talks about his "small part" in the indie film Mrs. Recto 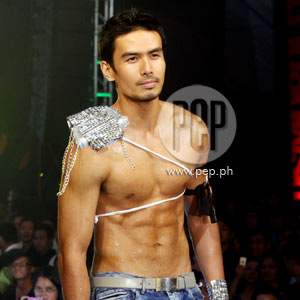 Although he's already famous in the Philippines and some neighboring countries as a singer, Christian said he still wants to be known as good actor.

PEP (Philippine Entertainment Portal) chatted with Christian last night, September 15, at the photo shoot of the talents of STAGES management at The Room in Quezon City.

The young balladeer told PEP he is in a process called "reinvention."

Part of this change is his acceptance of a series of acting roles. Christian is currently taping Your Song Presents Beautiful Girl for ABS-CBN, and an indie film called Mrs. Recto directed by Dante Nico Garcia.

MRS. RECTO. In Mrs. Recto, Christian plays support to Regine Velasquez, who will play the title role of the film.

Christian explained, "Mrs. Recto is a movie that revolves around Ms. Regine Velasquez. She is Mrs. Recto.

"I'm just playing a small part in the movie. I'm very happy to be part of it kasi nga kasama si Pen Medina, Coney Reyes, Regine Velasquez, and many others.

"The film wants to show the Philippines and the world how life is in that part of Manila...

"What are the lives that revolve around Recto. How many people there are on Recto almost every night, ang dami-daming tao, even in the middle of the night.

"We want to show the good side of that place and what Filipinos over there struggle with, or what their lives are like.

"Mrs. Recto is the story of Clara M. Recto, played by Regine Velasquez. In the movie, she has a daughter na ayaw mag-aral, which is weird kasi Recto is part of the University Belt.

"It's all about the relationship of Mrs. Recto with the people dun nga around that area, dun sa dorm na mina-manage niya.

"It goes deeper dun sa kuwento ko, pero I think Regine would have more to say about that."

He also explained his role.

"So yun ang mystery niya. So you'll find out. Malalaman n'yo when you watch the movie," he said.

The past shooting days have been manageable so far, he said, despite the number of people watching them on location at Recto, a busy section of Manila, near Quiapo and the city's University Belt.

But he added that the "energy" of Recto has a direct effect on him.

"Nung nagpunta nga kami dun, parang nagulat kami how busy it is, how full of life it is," he said.

Is Christian ready to go to top film festivals around the world to showcase Mrs. Recto?

"Yeah, sure, that'll be great kung makasama kami sa iba't-ibang international events. That would be amazing, that'd be a dream," he said.

"I would also want to have an acting award," he added. "Someday."