Piolo Pascual disappointed that his son was shown on television 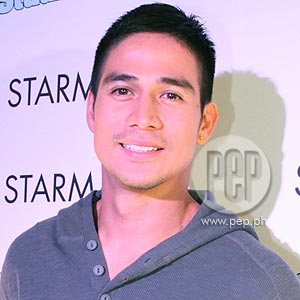 "It's something I wanted to share with my son without the cameras," says Piolo Pascual about the private moment he had with son Iñigo that was shown on SNN earlier this week.

Piolo Pascual was surprised when ABS-CBN's daily entertainment show, SNN, aired footage of his son Iñigo, taken when the boy was on the set of Piolo's current television series, Noah.

Piolo said given the chance, he would have requested the staff not to air it because he never wanted his son exposed to the public.

In a short chat with PEP (Philippine Entertainment Portal) and other media at the official launch of Star Magic Catalogue last night, September 16, at the Powerplant Mall, Rockwell, Makati City, the matinee idol related what happened.

"Actually, I wasn't told. When SNN came to the set to interview me about Noah, I never thought na isasama nila ang anak ko.

"I'm very sensitive when it comes to my son because he's not showbiz.

"It came out at the time when I was landing from the States, mga Monday night. My handler told me nga na ilalabas.

The singer-actor repeated, "I've always been vocal about, you know, questions about [my son].

"But, you know, [making] him appear in front of the camera was something I could restrict because, you know, nag-aaral pa 'yon.

"I just don't want him exposed."

Piolo also said that before his son arrived in the country, he had requested the media not to cover any of his private moments with his 13-year-old son.

"That's why I was surprised," he continued. "I'm not saying anything against SNN naman because we're in one network.

He concluded, "Sana hindi ganun because, you know, hindi naman nag-complain 'yong bata sa akin but it was a private moment.

"It's something I wanted to share with my son without the cameras."