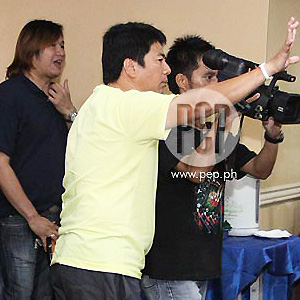 Willie Revillame talks about his new show, Willing Willie: "Yung title, ako ang nag-isip." But he gives credit for the totality of the concept to his "head writer, AP [associate producer], and the rest of the team...Kumbaga, input na ito ng lahat, tulung-tulong, the games, lahat. I cannot do this alone."

Willie Revillame really wants to be the producer of his own show. This is one huge reason, among many, that he gives for inking his multimillion-peso deal with Manny V. Pangilinan's TV5.

His own newly established company, Wil Productions, will co-produce his upcoming two-hour game show on TV5, Willing Willie, which he openly admits will have a lot of Wowowee in it.

The show is given a set monthly budget by TV5 which runs into the millions, explains Wil Production's Business Unit Head Jay Montelibano, 48-year-old veteran of such shows as Eat Bulaga! and Magandang Tanghali Bayan, where he first worked with Willie in 1998.

Whatever savings are made on the show's budget go to Wil Productions. These savings then go to a "kitty," adds Jay, and will eventually be distributed among the staff.

Essentially, Jay notes, "The bigger the staff position, the bigger the share of the pie, but everyone, including the seamstresses and the laundrywoman and the utility, will share."

Pressed by PEP for more information on the business deal between the two camps, Jay smiles and says TV5 is "a generous partner."

Indeed, according to Jay, their deal allows for this: "At the end of every year, whatever the earnings of TV5 over and above the target income, will be split evenly between Wil Productions and TV5."

In Wil Productions, Willie has for his partners: Viva boss Vic del Rosario, mistakenly referred to as Willie's "manager" in an official TV5 press release ("I have no manager," Willie clarifies); and well-known lawyer Alfonso "Boy" Reyno, whom Willie describes to us as "ang father-in-law ni Vicky Morales," referring to the GMA-7 anchor and host.

Willie says, "Ako ang CEO and chairman, Boss Vic is the president, and my legal is Atty. Boy."

MANY, MANY PLANS. During the interview with PEP, Willie's face would visibly light up at the mention of his latest venture.

As he puts it, "This is what I want talaga—to produce my own show. Kumbaga, ito na 'yong pinakagusto kong gawin, e. Gusto kong magpasaya at magbigay ng hope, pag-asa sa kanila."

But he says that Willing Willie is only a prelude of things to come.

The star, who turns 50 on January 27, 2011, says his immediate plans include producing a show that will discover talents. He doesn't have to be in the show, he adds, but he definitely wants to be its producer.

"The concept of the Born to be a Star is may category ang mga bata, may binatilyo, at meron din siyempre yung mga nangangarap. Dito, paglabas mo sa camera, star ka na kaagad. We will treat you like a star. So it's to up you if you wanna be a star..."

Then he's going up against Sharon Cuneta's Star Powerof ABS-CBN, which has a similar concept?

The noontime show that made him famous, Wowowee, became a hit among subscribers of ABS-CBN's TFC (The Filipino Channel). Can he pull off his grand plans now that he has virtually no exposure abroad?

"Well, wala na..." he admits, but comes back with, "Pero I've talked to Atty. Ray Espinosa [president and CEO of TV5] during our contract signing with MVP. He told me na we'll have that early next year!

INVESTMENTS IN THE OFFING. Prior to the birth of Wil Productions, Willie bought land to the tune of P47 million, just across the ABS-CBN studio entrance. This is where his Wil Tower Mall, a 38-story condominium and commercial establishment, will rise.

After Willie left ABS-CBN—undoubtedly, the network that made him a very rich man—rumors floated that the construction of his multimillion-peso Wil Tower Mall would no longer push through.

How does it feel to have his future building right across ABS-CBN, his home for nearly 12 years, or half of his showbiz existence?

He replies, with a trace of fatigue, "Well, e, ganun talaga. Siyempre, hindi naman ito because may competition, it's business. This is my business side, the Wil Tower Mall and my network.

Given all his plans, it almost seems like the breach of contract case—filed against him by the Kapamilya station last September 16 at the Quezon City Regional Trial Court—is farthest from his mind. What are his lawyers saying?

PERSONAL LIFE. More work means less time for other things, so before the launch of Willing Willie, the host plans to see his doctor.

The 24-year-showbiz veteran, who has been away from the cameras since May 5 of this year and has developed a visible paunch, says, "Magpapa-checkup ako. I feel, mag-i-start na ako, [kailangan] nagpapakundisyon."

It may be recalled that in July 2008, Willie made several trips to the hospital because, in his words, "may ulcer," "may scar yung intestine," "may nana yung colon," and "yung puso ko, may blocked na isang ugat."

His numerous problems have convinced him to draft his will.

If something happens to him now, he says, the will shall leave him worry-free about his kids. He has four children: the 27-year-old Meryll (with Bec-Bec Soriano), the four-year-old Juan Emmanuel (with Liz Almoro), the 21-year-old LA, and the six-year-old Marimonte Chanel (the latter two with non-celebrities).

Happy to share the latest about his kid, Juamee, Willie says he has finally spent time with his only son.

Spending time with his son seems like the utmost luxury for the businessman-producer-host, who has been separated from Liz since 2006. Liz invoked Republic Act 9262, or the "Anti-Violence against Women and their Children Act of 2004" law, to prohibit Willie from going near his son or even mentioning the boy's name in his TV shows.

In 2007, Willie and Liz became friends again for Juamee's sake. And although Liz's case accusing Willie of violence was eventually dismissed by the court, Willie has been unable to visit Juamee on a regular basis.

Does he have time for love?

"Meron ba?" he asks with a naughty smile. Then, typically Willie, adds lines that to him are light and funny but which perenially get him into trouble with the women's movement: "Wala... In the service of the Filipino women tayo. Basta, in the service ako, any time. One text away, I'll be there para mag-enjoy."

PEP makes the mistake of following up with how many girlfriends he has, triggering more irreverent quips that are sure to get him into more trouble.

But when the topic shifts back to his goals, he turns serious.