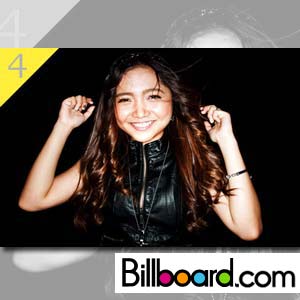 Charice's inclusion in the list was attributed to her association with American television talk show host Oprah Winfrey, who strongly supported the young singer's international aspirations by constantly inviting her to perform on Oprah.

Being part of the 2010 Golden Globe Awards winner Glee, however, sealed Charice's status as one of the hottest young stars with the "potential to rule the pop culture zeitgeist over the next 12 months."

The write-up went further, "Credit the Queen of All Media [Oprah Winfrey] for plucking the Filipina sensation from obscurity two years ago and introducing her to Celine Dion. The hype finally paid off this spring, when Charice debuted in the Billboard 200 top 10 with her first U.S. album. But it's Fox's high school musical hit, on which she now plays a foreign exchange student with killer pipes to match Rachel Berry's, where Charice will show millions of Gleeks that she can out-sing the best of them."

Charice's successful Glee debut also propelled two of the songs she performed in the musical series to the iTunes Top 10 list in the United States.