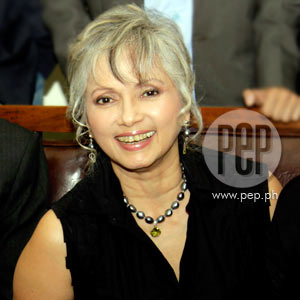 For her performance as Mary, the abandoned wife with three grown-up children, Celeste Legaspi wins over her audience, and for more than just her acting. There is also her good diction, articulation, and perfect voice projection.

Theater and music icon, Ms. Celeste Legaspi, hasn't done a play in English in a long while, and now welcomes the opportunity to appear in Tanghalang Pilipino's American Hwangap, currently being staged at the Little Theater of the Cultural Center of the Philippines.

"I think the last time I did an English play was in high school!" Celeste said, when interviewed by PEP (Philippine Entertainment Portal) at the premiere for the play's English version last September 17.

Among Celeste's well-wishers that night were her husband, music composer Nonoy Gallardo, her manager Girlie Rodis, and other close family friends and relatives.

For the multi-awarded singer-actress, doing the play written by New York-based Korean playwright Lloyd Suh was "a reacquaintance with the language."

"I really like the way it was written," added Celeste. "Before, I embraced Tagalog talaga because, you know, I got to work with Rolando Tinio [National Artist for Literature and Theater]. So, it was a very fulfilling experience. It's nice nga, e. Parang... it's a full circle, di ba?"

She may have appeared in several musical productions with librettos in English some years back, but a straight English play, like American Hwangap, is a first in decades.

And for her performance as Mary, the abandoned wife with three grown-up children, Celeste Legaspi wins over her audience, and for more than just her acting. There is also her good diction, articulation, and perfect voice projection.

"Thank you!" she acknowledged the compliment of PEP. "Being older also helped a great deal in understanding and appreciating the language."

Playing the adult kids of Celeste and Bembol are Jeremy Domingo, as the New York-based investment banker David; Liesl Batucan as Esther, the young single mother; and Nicco Manalo, as the child-like Ralph.

"Yes, they're all hardworking. I enjoyed the play very much!" Celeste gushed about her co-actors.

RELATING TO MARY. As to her role and performance in American Hwangap, Celeste said she related to the character of Mary.

"Actually, yes, kasi... these are the relationships of the mother with her children. And my children are in their 30s, with their own complex challenges to face. As a mother, I have one married child and another child [Waya] who will be married very soon to a foreigner.

"So, that kind of relationship of a mother, with 30-year-old children, damang-dama ko 'yun sa play," she said.

"What was written there is true. Some of those things they talked about, I've experienced in my life, in my relationship with my children. So, it's true na naka-empathize ako strongly.

"Maybe that's why I'm saying that the play is real. Ako kasi, I always made it a point that I don't tell my children, 'You talk to me!' For I will not judge you on anything.

"In the play, they [the children] cannot talk. So there's the difference, na hindi naman exactly the same, but there's a difference."

Celeste agreed that American Hwangap is a well-written play on the complexities of dysfunctionality, and how the members of a family cope with it.

"Well-written and very fun," she commented "And it's real. The playwright is very good. I like the characters."

Continuing, she said, "My character is very real. 'Yong conflict ng buhay niya, how she rises up to the challenge of raising the family without her husband, I think, that's a very interesting character. And she succeeded in the end. Victorious siya. At the same time, hindi pa niya alam how to play the game."

What was it like acting out the part of the wife and the mother of three grown-up children? With Bembol Roco as her husband?

It was a funny seduction scene by the stairway, and both Celeste and Bembol, who play husband and wife who had lived apart for some fifteen years, now felt a mutual longing for each other—except that their own children disapprove.

PEP overheard Celeste telling her well-wishers, in jest, after our interview, "My best moment was when I held his [Bembol's] puwet!"

Bembol, as Min Suk Chung, was to celebrate the 'hwangap' with his family, after 15 years of abandonment.

The 'hwangap' is the 60th birthday celebration of a male person, according to Korean tradition, in which the celebrator has completed the Eastern zodiac and is preparing for a rebirth.

How different was stage acting this time, after years of not doing theater?

"Everything has remained the same," she mused. "You have to have the skill, have to be punctual, read your scripts, and have to interact with your co-actors. Everything is the same except that it's very comforting. Nothing has changed.

"I've worked with Bembol before, sa movie ni Mario O'Hara [Tatlong Ina, Isang Anak, in 1987], with Ate Guy [Nora Aunor]. It was fun! I've never done a stage play in a long time. This is my comeback!"

ON THEATER, OPM, POLITICS. Celeste said that theater will always remain a priority.

"Mahal ko talaga ang theater. I began with theater when I was eleven years old , or even younger yata, so I always know na if I finally retire from singing, which I have done, 'yung theater talaga ang babalikan ko.

"Gustung-gusto ko 'yun, e. Love na love ko ang theater. I think the only love I have that's bigger than theater, is for my husband." Celeste is married to Nonoy Gallardo, music composer.

The OPM is currently pushing for the reduction of amusement taxes on concerts and other musical performances starring local artists.

It was President Noynoy who inducted into office the newly-elected officers of the organization.

Asked about songs composed by her husband, which she has recorded, Celeste Legaspi drew up a list of truly memorable titles.

"Tuliro was composed by my husband, Gaano Kita Kamahal, one of my biggest hits, and Mamang Sorbetero, of course," she said.

As a movie actress, Celeste Legaspi was once leading lady to former President Joseph 'Erap' Estrada, in Mamang Sorbeterto, a 1980 Metro Manila Filmfest entry based on Legaspi's top-selling record. She played a socialite and he, a sorbetes or "dirty ice cream" vendor.

Celeste said she was one with the movie industry, but she admitted to not voting for Erap in the May 2010 elections. Like her other colleagues—Apo, Kuh Ledesma, Regine Velasquez, Noel Cabangon—Celeste was a staunch supporter of Noynoy.

She was also a staunch supporter of the People Power revolution of 1986 that dislodged the dictator Ferdinand E. Marcos and installed Corazon "Cory" Aquino as President of the Philippines.

"I'm sorry. I voted for Noynoy and I voted for Cory. Oo naman. Everybody is entitled to their own political opinion," she said.

She also said she believes there is a bright future ahead for Philippine theater.

"As always, mahirap ang pagtataguyod ng theater," Celeste admitted. "As a matter of fact, we had the theater company na focused talaga on original Filipino musical, pero we were not able to sustain that until today.

"We've stopped producing musicals, but we were able to produce and create six good works, di ba? I think that's a very good thing that we've worked on.

"Talagang mahirap ang theater, kasi siyempre you have to compete with what is very commercial," she said, but added, "pero we're still here!

Also, according to Korean tradition, as depicted in the current play Celeste Legaspi appears in, she is now a hwangap.

And she said she's happy to see that theater in the Philippines is progressing.

"Nahihirapan nga lang, but through the years, there has been a lot of progress," she said.

She also said that with PHILSTAGE, nothing has been as significant as this: There is now a union for different theater companies in the Philippines!

In terms of talent fees for theater people, in both the straight and the musical plays they appear in, has there also been a great improvement?

"Well, based on my fee dito sa American Hwangap, very little," Celeste laughed, referring to her fees. "But it's the audience pa rin, kasi venues are small, 'di ba? As compared to movies, na paulit-ulit and palabas."

Produced by Tanghalang Pilipino (TP) and directed by Chris Millado, based on the play written by the Korean Lloyd Suh, American Hwangap continues its regular run at the CCP Little Theater.