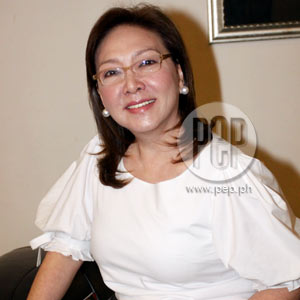 "It was truly a challenging year for our country, but with the indomitable Filipino spirit, difficulties turned into opportunities for giving and sharing. It is true that the worst of times could also be the best of times, especially when love is shared," wrote GMA-7 news anchor and Kapuso Foundation head Mel Tiangco in her message in the foundation's 2009 annual report.

"To say that the year 2009 was a most challenging year for GMA Kapuso Foundation would be an understatement. The year started with predictions of fraught economic conditions," GMA Kapuso Foundation Executive Vice President and COO Carmela "Mel" Tiangco wrote in the foundation's 2009 annual report.

In 2009, Typhoons Ondoy, Peping, Ramil, and Santi, battered the country in quick succession-leaving the nation, and the world, shocked by the devastation left by nature's wrath.

But light shines even in the midst of darkness as Filipinos came together to help their less fortunate countrymen.

The Kapuso Foundation witnessed and was, in fact, one of the many non-government and socio-civic organizations that responded almost immediately to the urgency of the situation.

"The 24-hour Operation Bayanihan called for donations and volunteers to repack the relief goods and distribute them to calamity victims, not only in Metro Manila, but also in suburban cities and affected provinces in North Luzon.

"GMA Network Inc. and the Kapuso Foundation organized a telethon that generated more than P107 million in cash donations, more than P8 million in material donations and over P700,000 in service donations.

"The response of GMA viewers and the public at large was overwhelming. People from all walks of life came to donate cash and goods. They volunteered to repack relief goods and even provided vehicles to transport the goods to the affected areas," Tiangco wrote in the 2009 annual report.

HELPING ROUND-THE-CLOCK. Now on its 20th year, the foundation has come a long way from an organization established initially to address the needs of displaced Filipinos following the violent eruption of Mount Pinatubo in Zambales and the flash floods that hit the province of Ormoc, Leyte in 1991.

The Kapuso Foundation has widened its charity efforts to cover, not just natural disaster-caused concerns, over the years, it has filled up its calendar with various activities designed to help different sectors of society.

The Kapuso Foundation programs reached hundreds and thousands of beneficiaries, most of whom reside in remote places seldom visited by government groups.

The medical mission in March 2009 helped some 1,629 individuals in the armed conflict area of Indanan, Sulu.

Backpacks and school supplies were distributed to 45,884 Grade 1 pupils in the NCR, Luzon, Visayas, and Mindanao. After a series of typhoons, medical services reached 12,223 individuals, while relief assistance benefited 747,347 people.

In December 2009, the foundation handed out Noche Buena packages of toys, gifts, clothes, blankets to a total of 31,580 children in Central Luzon.

"The typhoons and the flooding destroyed many establishments, including school buildings. GMAKF saw the immediate need for the repair and rehabilitation of affected schools," Tiangco wrote.

"With some of the donations generated by the telethon, GMAKF initiated the Kapuso School Rehabilitation project.

"These schools will be rehabilitated in time for the school opening in June 2010. At the start of 2009, two schools in Romblon already benefited from the KSR project."

OVERCOMING OBSTACLES. Being well-connected to a broadcast giant doesn't necessarily mean that the foundation is well-funded and could sustain its various projects.

"We are non-stock, non-profit. Wala kaming kita. So, that alone is a challenge because we need to look for funds, we need to look for resources to continue our projects. Although we are very lucky, kasi meron kaming network that supports us," said Tiangco in an interview with PEP (Philippine Entertainment Portal) last November 11 at the GMA Network Studios in Quezon City.

"But you see our projects are in the millions. It's not enough, although we are very thankful to the network for all the help that they've been giving us," she said.

The veteran broadcast journalist also cited the obstacles they face every day when it comes to the actual implementation of their projects. Some of the concerns they deal with included logistics, transportation, and again, money.

Transportation is crucial in any charity endeavor especially since most of the places that need assistance are not accessible by road.

"However, we in the foundation, feel that the harder it is for us to deliver our services, the more blessings naman na ibinibigay sa amin. Always 'yan, the blessings equal the challenges," she said.

HEART IN THE RIGHT PLACE. Working in a socio-civic organization pays little, and finding individuals who are willing to sacrifice both time and money to help others is a calling not many are willing to heed.

"We want staff that have service in their hearts—kasi nga non-stock, non-profit kami," Tiangco explained.

Tiangco admitted to feeling sad because of the hardships they have to endure in carrying out their collective mission. But she never recalled feeling frustrated throughout her stint as foundation head because "there is enormous joy in helping."

"I don't think I have ever become frustrated," she said. "You get a little low 'pag meron kaming pasyenteng inaalagaan for a long time tapos namatay. We get low 'pag may mga ganun, we really feel it. But you go on and continue.

"Ako, personally, I think it is a calling. It is a vocation more than anything else and I look for that in my staff," Tiangco said.

"Imagine, puro kinakausap namin mga mahihirap at lahat ng klase ng problema nandiyan. It's sad when you go to a place and you see a little child who is so sick. You ask, 'Why? Why a little child?' But still, naku-compensate ng fulfillment through helping."

STILL NO TO POLITICS. Tiangco has seen too many of her peers, contemporaries, and colleagues plunge into politics.

Some personalities like Loren Legarda and Noli de Castro have been successful. Others, however, failed to make an impression on the voting public and opted to return to their original profession.

"I don't need politics to get rich, I'm well-paid by GMA in my job. I don't want to go into politics. I just like to help even if I am not a politician," Tiangco said.

The outlook reflects GMA Kapuso Foundation's overall objective which is to bridge the distance between those who need help and those who want to extend a helping hand.

"Basta ma-improve lang namin ang life ng mga tao in a little way. May kasabihan nga na anything is good, walang malaki at walang maliit, for as long as you do it for the good of your fellow man."