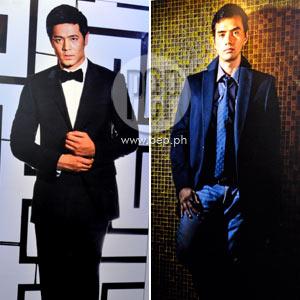 "We wanted a little controversy!" laughed Metro Society editor-in-chief Raul Manzano concerning their decision to include Hayden Kho Jr. (left) in this year's list. The "aspiring perfumista" and entrepreneur described his personal style as "simple, not overdone." Hayden, who considers Randy Ortiz as his favorite designer, donned a Lanvin suit during the pictorial. Actor TJ Trinidad (rig

"What a strange power there is in clothing."

That statement by Jewish American author Isaac Bashevis Singer best describes the theory behind Metro Society's yearly habit of coming up with its "Men in Suits" list.

Editor-in-chief Raul Manzano asserts that a "man always looks good in a suit" and that "it shows his style and taste, not just merely in the fashion sense."

Coming up with the final list goes beyond style and good looks. Much attention is given to the character and success of the 16 male subjects in their respective fields and industries.

"It was hard trimming it down also and it's just that I wanted some new faces this time instead of the usual faces you have from the other magazines. We have a lot of foreigners and what-not here now in the Men in Suits," Manzano told PEP (Philippine Entertainment Portal).

And just like in the previous installments of the annual list, a photo exhibit was staged last March 29 at the E's Bar of the Edsa Shangri-La Hotel in Mandaluyong City.

The exhibit featured neatly blown up portraits, as seen on the pages of the magazine's March issue, of the men handsomely wearing their "own" suits from designer brands D&G, Bespoke, Zegna, Giorgio Armani, Tom Ford, Hugo Boss, Paul Smith, and Lanvin.

Men are naturally not as meticulous as women when it comes to fashion. But things have changed over the years and men nowadays appreciate looking and feeling good from what they see in the mirror.