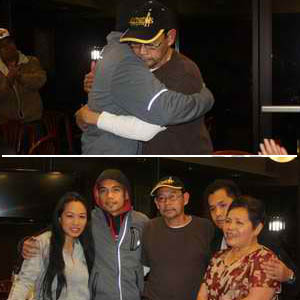 "And I just wanted to apologize to my dad as well for the things I've said. To my family, the Donaires, for all the things I've said. And a lot of people has been hurt about this. And I am really happy that my family and I, with my wife, we got to talk and clear things out and this is a blessing," says Nonito Donaire Jr. after his reconciliation with dad Nonito Sr.

"My family and I are gathered here to square everything. The misunderstanding, the anger, the hatred. We just want to make things right. Both sides have suffered a lot of pain, suffered a lot of...just everything. From sleepless nights to just whatever, embarrassment, and reputation.

"Now, we're here. We talked. I talked to my dad, my mom, and my family, and we are pretty much... Just to clarify out there, my dad has always been, and I am most thankful to my dad for making me who I am, as a fighter, as a guy, in the talent that I have, because my dad created that with me... I'm always gonna say that.

"But first off, to clarify things about the money, the money was not the issue, you know. It was a misunderstanding that got... Media, media was to blame for things like that, that got brought out, angers came out. But my dad never stole anything.

"My dad was always there to protect me and he has always looked at [sic] for my best benefit. And for me as a son, I took it as a person, like being overprotected in a sense. But, you know, as we talked, the misunderstanding came out. We were just trying to look out for our best interest. My dad has always been there.

"And to clarify things about the other side, my whole family accepted that. My mom is friend...and I'm taking care of the kid, Tricia. And I know that they've suffered as well as we did.

"And a lot of people has [sic] been hurt about this. And I am really happy that my family and I, with my wife, we got to talk and clear things out and this is a blessing."

Aniya, "First of all, I wanna say thanks to everyone, especially my family, who prayed for this that we can reconcile with my son. I've been hoping for this for so long.

"Maybe if I see something bad for Junjun and Rachel, I ask for their apology 'cause in my heart, I really didn't mean to say. I said before that Rachel is manipulating, maybe because I'm mad at her, so maybe I say that. To her parents, if I say something, I aplogize to you. I'm sorry.

"And I hope all these things will go straight. Because some of the media that were supposed to help our relationship...that supposed to bring our family back...

"And to those people who say that Nonito jr. is ungrateful, I'm the only person who can say that because I'm his father."

"I called Papang last night to put this meeting together because I thought that this would be the best and the only time that, you know, before everything went out of control and we could not control it anymore.

"Things were said. A lot of people got hurt. And as much as there were lots of rumors that went around, Papang never stole the money. It was all a misunderstanding and it didn't help that the media twisted and edited our words to make it, actually, to make us fight more.

"I think this has to be a lesson for all of us, for anyone who gets into that spotlight by accident. All of us are amateurs in dealing with the media and all of us trusted that every single person that wanted an interview really had the best interests in our family."

Aniya, "There are certain people in the media who have gotten fame from tearing our family apart and I think that collectively today, after seeing everything that has been out in the media and talking about what has really hurt us, the source is all the same—it's all the media.

"So, to those people that thought that they gonna ruin the family and watch us destroy and burn ourselves. To Chino Trinidad, Recah Trinidad, to Anthony Andales, and to Granville Ampong, you're not gonna destroy the Donaire family. And you better go find another tsismis to go, actually, bring any more hits to your site. Because what you did was unprofessional, it's digusting, and it's unlike a Filipino.

"I hope every one sees this and I hope that everyone learns from this. We all make mistakes and I'm sorry if I've hurt any of the Donaire family. I'm sorry if I hurt Papang.

"Like I said, all of us said everything that we said out of anger. And I hope that in time, everyone will forget everything. All the wounds would be healed and all the scars will be gone and we will be one big happy family again."