Adam Levine of Maroon 5 poses nude for a cause 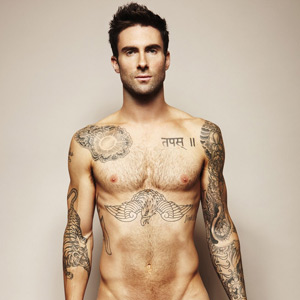 Adam Levine, the frontman of Maroon 5, posed nude for Cosmopolitan UK to raise awareness for prostate cancer. The American rock band will perform at the SMX Convention Center on May 23, 2011. For concert updates, Like www.facebook.com/futuretainmentinc or Follow @futuretupdate and @agustinmarvin or visit

Gone were the days when tribute songs and star-studded collaborations were the music industry's tried-and-tested methods to capture public attention. These days, bolder measures are necessary to make a point.

For the part of Maroon 5 front man Adam Levine, he made a statement by posing nude for Cosmopolitan, one of the top magazines in the UK, for the cancer organization Everyman. Not only did he get the attention of the screaming gals and gays, he also created more awareness for prostate cancer.


According to Filipino columnist and medical practitioner Dr. Philip Chua, prostate cancer is one of the most common cancers in man around the world, killing one almost every 19 minutes, and discovering a new case every two and a half minutes.

In the Philippines, it is one of the top five cancers among men, and in 2005 alone, about 4,000 new prostate cancer cases were found.

To reduce the risk of prostate cancer, studies suggest going vegetarian or vegan—a practice that Adam Levine of Maroon 5 lives up to, as stated by his band mate Mickey Madden, who said in an interview that their vocalist eats 85% vegetables in his diet for health reasons.

What made Adam agree to pose nude?

"I often have to be told by the people around me that it's inappropriate to be as naked as I am. But I live in California, where it's always warm, so why not," he said.

To add to the tastefulness of the shoot, Cosmopolitan got Adam's current girlfriend, Victoria Secret model Anne Vyalitsyna,to cover his "essentials."

The shoot was a timely follow-up to the launch of Maroon 5's new single, "Never Gonna Leave this Bed" from the group's new album Hands All Over.

And good news to all the Pinoys, Maroon 5 will be coming over to Manila for a concert tha will feature their greatest hits! Mark the date: May 23, 2011 at the SMX Convention Center.