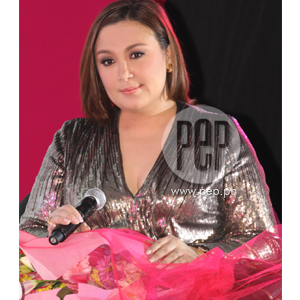 Sharon Cuneta on baby Miguel: "He's the light of our life now, and 'yan, [he] calls me 'Mama.' But his best friend is his dad. But I'm kinda nahihilo kasi iba pala pag boy. Ang likot!"

Sharon Cuneta is up, and she's 20 lbs lighter!

After her "fantastic fall" at the Big Dome—where her birthday concert was held last January 11—the Megastar is back to her usual jolly self, and greets the press and media people present at the launch of her new endorsement today, January 19.

"I didn't suffer anything from it," says the Kapamilya star. "It's just that, I think it aggravated my...I was...it was basically exhaustion. Not my fall, it wasn't caused by the exhaustion...Yung heels ko, they made a mistake. Actually, my staff...Well, nobody brought my dancing shoes."

Moving on, her birthday celebration continues at the Mandarin Hotel, where she announces, "I signed up with Marie France in second quarter of last year, and I started the treatment in July."

So far, she has already lost a few lbs and 24 inches all over her body even if her visits to the clinic have been "on and off" due to her showbiz commitments. And she's very serious about her goal to "become slimmer and healthier again."

She relates, "This time, I'm gonna do this steadily, not as slow as if I'm going to do it alone. No, because I know whatever treatments they have will help me speed it up. But not too quickly that my body will suffer because it's not healthy to lose weight too quick also. Take it from me."

The mother of four attributes her weight gain to "babies" and the ill effects of "crash dieting," which she describes as "talagang starvation mode."

(According to www.weightlossforall.com, crash diet "slows down the metabolism, causes extreme food cravings, and is dangerous for your heart, kidneys, liver, and brain because you lose lean tissue around them.')

The Star Power host continues, "When I get to rest from that diet, the rebound weight would be horrible."

Her decision to become more fit was motivated by her desire to have a more active lifestyle. "I've always wanted to have a nice long walk with my children, not naman marathon... It's to keep up with them pag naghahabulan diyan. When I tickle them, hindi ako hapung-hapo agad."

Partly, she's also going to do it for work, "I couldn't possible finish a movie if I have no energy. I wanted to give my fans my best..."

A LOT TO THANK FOR. But Shawie (her nickname) still considers herself "very blessed" because the extra weight did not turn off her loyal Sharonians, and did not drive away projects.

This early, she already has a busy calendar year. She enumerates, "End of the month, I'm leaving for the States. I'm doing three shows outside of San Francisco-Cache Creek [Casino Resort]...And then I come back, continue with Star Power.

"I'm not doing a Valentine show this year, my husband wants me to himself...And then, February, we will have the finals of Star Power. By March, I'll start the Biggest Loser Pinoy Edition, and then shooting a movie already. And then I'll have a concert tour in Europe in the middle of the year."

More than three decades since she popularized "Mr. DJ," Sharon is still very much in demand.

"I have had a very rich, very blessed life my first four decades...Lesson? Gratefulness, gratitude, saying thank you...Even just, you know, when you wake up in the morning you say 'thank you for another day.' And before dying today—I hope I'm not one of them—my kids, I'll have the chance to hold them and you know kiss my kids and tell them I love them. And I'm thankful coz I'm getting a lot of work to do," she says.

And what's her formula?

"I don't know," she replies. Giving the question more serious thought, she states, "If you devote your time and attention, and you sincerely love what you’re doing, they’re bound to love you back. And God has been really extraordinarily good."

NO INTRIGA FOR NOW. Isn't she glad her life in showbiz is not in any kind of turbulence at present?

"We're okay na," she exclaims. "It was actually...When we talked, it was Aga that got in touch with me...It wasn't really scheduled, it wasn't planned, but I really appreciated the gesture and the effort. And then, he just said, 'Alam mo naman, e, sa Araneta, wala akong problema do'n.' But apparently, some people had a problem with it."

But she realizes now that the Big Dome was not the proper venue to reveal her "tampo."

"In retrospect, maybe, I shouldn't have said anything," she says in a serious tone before adding with a laugh, "I'm sorry, sometimes, I'm too comfortable in Araneta. It's like my comfort zone. I grew up there, so, parang I forget sometimes it's a whole audience. Coz the way I banter with my audience when I'm doing concerts is...It's so very down-to-earth way.

"That night, I had tampo and I saw my katampuhan, and I let it be known—which was, in retrospect, not very smart of me."

Earlier this month, her name got dragged into this issue involving Cristine Reyes, Rayver Cruz, and Sarah Geronimo. Her brief talk with the "Supahdance" member at the Christmas Special of ABS-CBN last December 14 did not escape the eyes and ears of the reporters.

Shawie explains, "I was doing my part as a friend to Sarah. You know, when you're friends with somebody whether they're in showbiz or not, hindi naman puwedeng you're there only pag maganda yung panahon.

"I stood up for my friend, and she happens to be a real person, a sincere person, she's hardworking, loves her family, loves her friends, and I just felt she got hurt and it wasn't right that the people involved in causing her hurt were parang putting her down pa."

"Someone said, 'Ayun po si Rayver, naka-ano...pumasok sa ganito...' A, halika, kasi my intention was, if I'm gonna contribute anything, I want it to be that they knew I wanted them all to be okay. So when I went out to meet Rayver, and you know, I had never talked to this boy. And I said, 'Anak, babae naman yung amin. Sabi ko, you know, I don't know you but I love her. So, ayusin mo naman, anak. Babae yung amin, protektahan mo naman.' Finished. As God is my witness..." recounts the Megastar.

She also underscores the fact that Sarah didn't ask for her advice or support, "She didn't know this, ha. I have to stress that. Sarah never told me. Never. It was her friends that told me. And Judy Ann [Santos] and I were very concerned lang."

And before moving on to the next topic, she gives her two cents worth: "Unfortunately, sometimes there are people who—I am not saying it's Rayver...But, sometimes some people don't understand what a decent approach means or is. They just try to retaliate in the way they know how and that makes me sad. But ultimately, it just shows that Sarah is always...She's always gonna be seen in a good light because she deserves to be."

Controversies are inevitable for every star, and Sharon can take everything in stride so long as she has "my children, my work, God's blessings, and now a very promising outlook on my career."

At 45, the future is still bright. Smiling, she adds, "I'm looking forward to my first apo. But not right now."