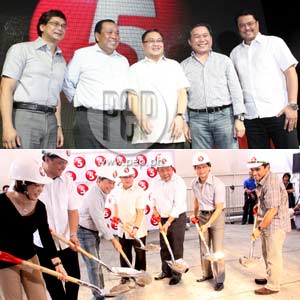 TV5 intensifies its expansion campaign with the groundbreaking of its new office and studio space located at Reliance corner Sheridan Street in Mandaluyong City.

Mayor Abalos expressed gratitude to Pangilinan for choosing to do business in the "Tiger City"—a label bestowed by the Department of Trade and Industry (DTI) and the Asian Institute of Management Policy Center for the city's vibrant economic and industrial activities since the late '90s up to the present.

TV5's would-be media center building is located in an area known to house warehouses and factories.

The area has seen major industrial changes during the past years with the construction of several high-rise condominiums, office establishments, and a shopping mall complex.

CUTTING-EDGE FACILITIES. The site of TV5's new office and studio was already an existing warehouse under the ownership of the Pangilinan-owned Philippine Long Distance Telephone Company (PLDT).

"We are now in five locations. It's really important, if not imperative, that we centralized the operations of TV5 in one location. We looked at all the properties of PLDT so that we don't have to buy a new property, so we chanced upon this location and the internal debate in PLDT was to convert this into Channel 5," revealed Pangilinan.

Management plans to transfer the network's corporate offices and production activities to the new building once construction is finished.

Phase one of the establishment is expected to be completed before the year ends.

TV5's Media Center, according to Pangilinan, will be "designed with the latest technology," equipped with the "most modern media facility ever in this country."

Pangilinan added, smiling, "I will not tell you how much we're gonna spend. But we're happy to promote our investment here in Mandaluyong and work with the local government."

When pressed by business reporters to divulge at least an estimate of the total expected cost for the project, Pangilinan coyly remarked, "Anywhere between big and very big."

Modern technologies available through Pangilinan's other firms like PLDT and Smart Telecommunications will be utilized to implement synergy, especially in transmitting lines and signals that are essential to news programs and live reporting.

LEARNING THE ROPES. Pangilinan was upfront in describing TV5 Media Center as perhaps his "biggest investment project" as a businessman.

TV5 has performed well under Pangilinan's stewardship, which is remarkable considering the longstanding dominance of the two giant networks, ABS-CBN and GMA-7.

The network managed to earn a slice of the TV viewing demographics since the arrival of Pangilinan's group in 2010, as proven by the strong showing of its programs in different timeslots.

There are "growing pains and lessons learned" along the way, said the soft-spoken entrepreneur, who admitted that the network business is a totally different ballgame as compared to his other ventures.

"It is very tough, as far as the other business that we have so far invested in. Kasi we are familiar, for example, telecoms are very competitive, and other businesses are as competitive as well. Pero ang nature ng TV networks is araw-araw, oras-oras nag-iiba 'yong kompetisyon, e," Pangilinan stated.

He added, "So you have to really be on board sa negosyong ito. The creative inputs, creative elements are very imperative for you to succeed.

"But at the end, it's really a question of people at nagpapasalamat kami to begin with, people like Paolo [Bediones], Cheryl [Cosim], Erwin Tulfo, who have wagered their future with us when we were starting and when we were small, and we're really grateful to the staff, to the talents who joined us—all of them.

"So much has been accomplished with so little and so short time for the year 2010, which is our first year of operations. We tripled our revenues in one year.

"Lugi pa rin kami, but that was expected. So, mahirap na negosyo ito. It's very competitive."

Pangilinan is confident that the new building and facilities will improve even more the quality of service that the network currently renders to the public.

But for now, and until the establishment's construction is fully complete, operations will remain as it is until everyone are ready to transfer to their new home.

"Well for 2011, we still have to rely on our Novaliches and satellite offices in Broadway Centrum and Skydome, which we're linking through PLDT broadband facilities and Smart. Actually the impact on the operations [while construction is ongoing] is minimal until these facilities are completed," Pangilinan said.