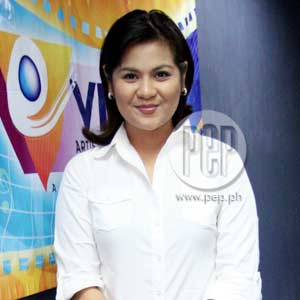 Candy Pangilinan's only formula when attacking her usually funny characters: "Be realistic..."

It began as a need more than a want.

Candy Pangilinan tried her luck in the showbiz industry because of her background as a stage actress.

ON COMEDY AND CAREER. Since then, she has become a visible face on the boob tube and the big screen, where she usually plays the female lead's comic sidekick.

The PEP blogger is good at timing, and knows how to throw punch lines. In most of her previous projects, people looked forward to the scenes where she was included.

Candy could only shake her head now. After so many years, she still finds it hard to believe that becoming a comedienne would be her turf. "Hindi ko na-imagine na magiging comedian ako. Hindi talaga...Wala sa utak ko na aabot ako sa ganito."

And she has been taking comedy seriously. "People don't laugh just because it's funny. They laugh because it is something they can think about. "

Does she have a dream role?

The contract she recently signed with Viva Entertainment is supposed to help her accomplish that.

Now that she just signed a contract under Viva Entertainment, Candy considers this career move an expansion.

Candy said, "Naisip namin na it's about time na we widen our horizons, we check new things and we can see naman that Viva could really be of help to us. And siguro, ganun din ang feeling nila. "

And what can the fans expect? "A better Candy who will really soar high. Ito na yun. This partnership with Viva will make it happened."