The twists and turns in the life of Mel Tiangco 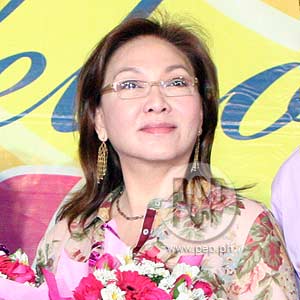 "Ganito pala 'kako mag-artista." This is how Mel Tiangco described her experience in hosting Magpakailanman, her previous program. "It really helped a lot up to now."

Mel Tiangco is not talking about starring in a lead role for a show, she's reminiscing her experience as host of her defunct weekly anthology program Magpakailanman.

She sees this show as way more difficult than the one she's hosting now, Powerhouse. The new show will feature the amazing houses and the private lives of the country's newsmakers.

Almost seven years of working as co-hosts, the newscaster reveals that in one way or another, she and the comedian have influenced each other.

For her part, the show serves as a breather from primetime news program 24 Oras, where she has to look always formal.

But when asked what she enjoys more, Mel couldn't pinpoint which. Newscasting has been part of her life for the longest time, while hosting is something new and exciting.

LOOKING BACK: THE TRANSFER. Talking about her life as a TV personality, Mel also relates the struggles that she had to go through before making it to where she is now.

It will be recalled that the first 10 years of her career had been with the ABS-CBN network. She moved to GMA-7 after the Kapamilya management deemed her appearance in a TV commercial for a popular laundry detergent a violation.

Looking back, Mel feels grateful to the Kapuso network, which took good care of her.

"Wala, pagpunta ko dito [GMA], after a few months, I had my heart attack. Then the GMA Management, ang bait, bait nila, they are so good to me. Biruin mo, wala pa kong trabahong nagagawa, they took care of my hospital bills, and we're talking here of millions..."

These struggles tested her strength and perseverance. She says she remained positive and saw her decision as God's plan for her.

"Let me put it this way, I really feel that this is providential. It is really God telling me where to go. This makes me feel that He's really giving me a mission kung ano gagawin ko."

And it was GMA-7 "that helped a lot" and "supported you all the way."

LOOKING FORWARD: HELPING PEOPLE. In return, she gives back via GMA Kapuso Foundation, which appointed her as its executive vice president and chief operating officer.

GMA Kapuso Foundation is a project by GMA Network initially to aid the victims of the Mt. Pinatubo eruption in 1991. From then on, the Foundation has continually rendered service by giving relief supplies to the victims of different calamities, as well as assisting ailing patients through the allotted segment "Kapusong Totoo" in 24 Oras.

But after dedicating herself to the masses for so many years, she thinks there's still more for her to do in her life.

When politics was suggested to her, she quickly said no. Even though being in politics could allow her to help people more, she wants to be in public service without politics getting in her way.

She revealed that her reason for not entering politics is her fear of losing God's grace.

Her apprehension doesn't stop her though from asking God to give her the chance to make her own mark in people's hearts.

"Parang ang ambisyon ko na God will give me the opportunity to really make a positive mark to the lives of my countrymen. I don't even know what I want. All I want is magkaroon sana ako ng ganun pagkakataon," says Mel Tiangco.