PEP EXCLUSIVE (Part 1): Boy Abunda on The Buzz interview with Baron Geisler: "There was no agenda." 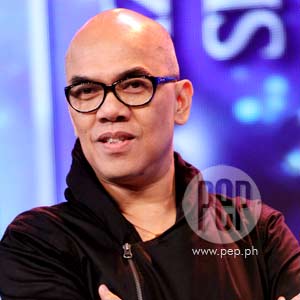 "I did not express, I did not indicate, and I did not imply that brilliance is an excuse to abuse anyone," says Boy Abunda about his The Buzz interview with Baron Geisler last January 23.

This is just a part of his reaction to the sentiments of Ed Instrella, Cherry Pie Picache's manager, on the way the segment of the 29-year-old actor accused of harassment was handled by the Kapamilya talk show.

It's not typical of the famous host to offer a lengthy explanation about a controversy involving himself.

"Hindi naman ako pala-react kasi," he begins. "It's as if I defended my article when I defend my body of work. Parang ang hirap-hirap ipagtanggol ang sarili mong trabaho."

In this case, he asked the permission of Roxy Liquigan, creative consultant of The Buzz: "Let me react."

One of the arguments raised by Ed Instrella was, "Boy emphasized and underlined he's [Baron] such a good actor. Parang justified maging bastos in the name of good acting."

"There were two things that I said. Buti na lang naaalala ko kasi fresh pa. 'Baron, you are a brilliant actor. You will always have space in the industry.'

"But, in no way did I suggest that brilliance is an excuse to harass anyone. It was in that context.

THE NOW-CONTROVERSIAL INTERVIEW. Instead of focusing on the harassment issue alone, the management of The Buzz decided to do a profiling of the interviewee.

In a phone interview with Liquigan at around 6:43 p.m., he says, "We want to make it different from the other shows, so ang topic namin aside from the issue, 'Why is he like that?'"

The major talk points were discussed by the bosses and the host prior to the 40-minute exclusive interview.

Boy elaborates, "I had no script. It was an interview where there were no guidelines. We play politics in this business to be able to get stories.

For his part, Baron came prepared. "He came ready. Naka-Amerikana, malinis, may kurbata. Sober na sober ang appearance. And he knew his lines," according to the host/ talent manager/ teacher.

Only 19 minutes and 47 seconds of the entire footage was aired. Liquigan says during the material's preview, they made sure the essence of the whole story was captured.

Boy admits he was not able to see the final tape, but he is pleased with what he saw during the actual show.

His explanation: "What came out on air is an editorial decision. Pero, hindi ko iiwanan ang show ko because I watch what came out. I take full responsibility for it pa rin.

"I'm not to say, 'Ay, sisihin mo ang staff ko.' Hindi. I stand by what the staff had done, and I don't think I deliberately—because we are in the context of perception—made Baron Geisler guwapo for what...

NO-AGENDA INTERVIEW. But the people's perception is beyond his control. And their judgment will not rely on his questions alone, but more importantly, on Baron's account of his experiences as a child and an adult.

Boy states, "I have no agenda about Baron. With my all heart and with all the years I have spent in the industry, I can say to anybody, eye to an eye, and I will say that I did the best that I can in that interview.

"It was a free-flowing, spontaneous, fluid interview. There were no agenda.

"I did not in any way malign or put Pie [Cherry Pie's nickname] into an embarrassing situation."

When he actually learned that he was doing the interview, his first reaction: "There he goes again."

In addition, he's not exactly good friends with Baron and his manager Arnold Vegafria. "But what is my attitude when I don't want an interview?" he asks before saying, "My biases are in my mind but I ask the question."

To prove his point, he cites this story on SNN, a nightly showbiz talk show he co-hosts with Bianca Gonzalez. "I was the first one who reacted... Baron and his manager are not understanding each other. They are not saying the same thing. And I said, 'I am confused,' on-air. That precipitated June Rufino [president of PAMI or Professional Artists Managers Inc.] to put a deadline on when a public apology should be done by Baron.

"My first reaction was, 'What is it again? There he goes again... Admittedly, it is very judgmental because I am reacting based on what I have been reading and what I have seeing in the past stages.

"But you know, sinasabi ko nga, when I go to an interview, I don't say I am interviewing somebody guilty—which is unfair. I also did not face Baron and say I am facing an innocent man being accused of a crime. I interview, I ask the question as an interviewer."

Several times he mentions that he's hurt over the insinuation that the interview was manipulated to work in Baron's favor.

In a level-headed tone, he underscores: "To be accused of making him look good is wrong. And they are wrong. I went to the interview with an agenda to make Baron look good? I did not. Categorically, I did not and I will not."