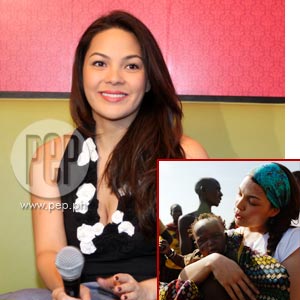 KC Concepcion's recent trip to Uganda to carry out the activities of the United Nations World Food Programme left a significant impression on the actress-singer-TV host.

Speaking before the local press in a press conference held earlier today, January 26, at the White House resto-bar in Quezon City, the actress-singer-TV host related her experience while in Uganda's impoverished regions for a five-day visit.

All mentioned areas are beset with problems, particularly malnutrition caused by food shortage due largely to the effects of climate change.

But armed conflicts are also a long-standing concern as ethnic groups reportedly continue to wage war against each other.

Uganda has been plagued with civil war for two decades, and although the country has managed to rise above instability and institute economic reforms since the '90s, some areas remain prone to human rights abuses and poverty.

"I didn't leave with any expectations except that I knew that visiting Africa was always in my bucket list. It was always one of these things that I have to do in my 20s. But I have never imagined my first trip to Africa to be so meaningful and so packed, and so real, and so genuine," said KC, who is currently serving as the Philippines' National Ambassador Against Hunger.

"The fact that it was with the WFP," she continued, "there's already enough excitement and adrenalin for me. It wasn't until they asked us to wear bullet-proof vests and helmets that it really hit me that there's a possibility [that I might get hurt].

"Because while we were having dinner, there were a few gun shots because somebody tried to steal some livestock, which is 'yong livelihood talaga nila... It wasn't until the days went by that you actually realized that there's a risk."

RISKY JOURNEY. KC is no stranger when it comes to visiting places categorized as "unsafe."

The daughter of Megastar Sharon Cuneta and former matinee idol Gabby Concepcion has been to remote areas in Mindanao to carry out activities and programs of the WFP since her appointment as ambassador in 2008.

Continued KC: "I realized it's the same anyway when I go to Central Mindanao. It's just that this time around, it was for a week. Usually in Mindanao, in Central Mindanao, we fly for a few hours and then fly back."

But there's a noticeable difference between Mindanao and Uganda: the presence of security personnel tasked to safeguard individuals on a humanitarian mission.

WFP Deputy Country Director Asaka Nyangara confirmed the danger involved in most of their field missions around the globe, saying, "We do risk our lives. A lot of our colleagues that we worked with have lost their lives while they're out there... Anything can happen."

How did KC's parents deal with the thought of their daughter being in another continent and putting her life in jeopardy for a good cause?

EYE-OPENING EXPERIENCE. KC was able to see the two sides of Uganda and this left a profound impression on the former host of the morning talk show Simply KC.

She remembered being greeted first by "the pulang lupa na maraming-maraming tumutubo" and the little shops that adorn the busy sidewalks.

The scenery, however, changed drastically as KC and her team moved to their real destination.

KC had to immerse herself deeply into the way of living of the locals to better understand their situation and to gain their trust as she carried out her mission.

"The more kasi you spend time with them, the more they're able to open up. Hanggang sa pag-alis namin dun, it was never the same. Parang may nagbago talaga sa akin."

Part of KC's activities included providing assistance to the communities in dire need of food and nutrition, interacting with women farmers and babies stationed in therapeutic centers, meeting up with people trained by WFP to create fuel efficient cooking stoves, participating in the harvesting of corn and other crops, and visiting a warehouse built to assist farmers dry, store, and gather their maize.

AUCTION FOR CHARITY. The press conference was also called to announce the auctioning of some of KC's personal belongings through the webpage KC's Closet found at eBay.ph.

Just like what she did in the past, the money that will be earned from the online auction will go straight to WFP's campaign in Mindanao.

"We were able to raise since late last year about half a million pesos that will all go to our projects in Central Mindanao especially for the school feeding. In the last ten days, because we put up a new batch of second-hand items for the online auction in eBay, in the last ten days, we were able to raise a 106,000 pesos just with most of my clothes, watches, and bags," KC proudly confided.

Having seen the situation of the people living in the sub-regions of Uganda brought some changes in KC's way of thinking.

It also made her look closely at her role as a celebrity and representative of a global humanitarian organization.

"Just being in the plane for 'yong 22-hour na biyahe and seeing the pictures, which I'm so glad I took in my own personal camera for personal use... It's just really, really, parang you'll see na there are things that you don't see off-hand when you're there.

"Then you go back to your world plus you're in entertainment so everything is presented beautifully, everyone's striving for perfection. Parang the glitz, the glamour, the high heels, the lights, the audience, and then you remember this quiet place under the hot sun with people you have never seen or met before.

"You remember all their stories about 'Yeah, my sister-in-law was killed trying to get these fruits four months ago. So we don't have anything to eat right now. We're eating the fruit peel of those fruits.' I mean, di ba, it hits you?

"Kayo ba when you're in a bad situation, and you hear stories like that na hindi mo naman araw-araw naririnig at minsan naririnig mo lang sa TV, pero hindi ka naman tinatamaan kasi you can change the channel?

"'Pag nagiging totoo siya, iba na 'yong pakiramdam talaga kasi no matter where you are, or what happens, or kung sinong kausap mo, or kung anong na-achieve mo, you will always know that there is a corner in the world that exists na ganun—and it's either that in our daily life, we forget that we think of this or we just never knew we did."