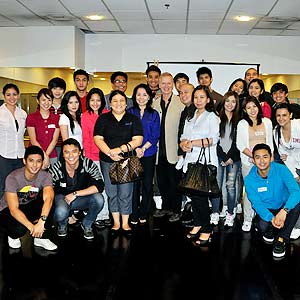 "Filipino actors are underused. They have more skills than what they are actually using."

These were the words of admired acting coach Ron Burrus following a workshop session he facilitated with some GMA-7 talents, along with other acting groups.

Burrus, who is a master acting coach of the famed New York-based Stella Adler Studio of Acting, was here in Manila last March to conduct a week-long workshop at the Arts in the City in Taguig.

Burrus believes that acting techniques should continuously be taught from one generation to another, and should transcend boundaries. Thus he has been inspired to stage lessons in places like New York, France, Italy, Germany, Japan, and now, Manila.

The Stella Adler Studio of Acting has been the training ground of more than a few Hollywood big names such as Robert de Niro, Kevin Costner, Benicio del Toro, Martin Sheen, Melanie Griffith, and even the late great Marlon Brando.

Tanghalang Pilipino's Nanding Josef, who incidentally served as the workshop's facilitator, revealed that Burrus's visit could be part of a bigger plan to establish an acting studio here in the Philippines to extensively train both professional and aspiring thespians.

Award-winning actress and I ♥ You Pare lead star Iza Calzado expressed excitement about signing up with an established acting school without having to travel overseas and temporarily halting her career.

As for her experience with the recently concluded workshop supervised by Burrus, Iza beamed: "I wanted to study acting abroad and further push my craft. But I can't be gone too long. So being in a Stella Adler workshop is worth like going abroad na rin."

For host turned actress Stephanie Henares, the workshop made her realize that hosting and acting are somehow similar, but with contrasting dynamics.

"Hosting is being who you are in front of the camera," said Stephanie. "Acting is hosting but not as yourself."

Participating in acting workshop under Ron Burrus was part of GMA Artist Center's initiative to further hone the craft of the Kapuso talents, aside from the regular trainings being conducted by respected Filipino acting coaches.