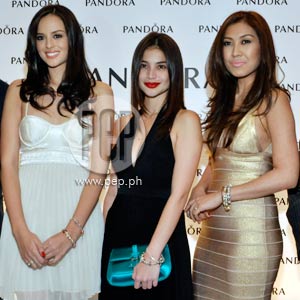 Anne Curtis (middle) on friends Georgina Wilson (left) and Liz Uy (right), "We're all very loyal to each other. It's a friendship [wherein]... we all instantly clicked." The three beautiful women are buddies in "dinner-dinner, hanging out in the afternoon, swimming..."

The three were invited to grace the formal opening of Pandora, a company founded in Denmark that sells customizable jewelry, last February 2, at Greenbelt 5 in Makati City. And that's also when the following sisterly banter took place:

Anne began, "Liz is the most fashionable. George is... how do you say this... a very loyal friend. A super loyal friend. She'll go all-out for you, and that's what she'll also expect."

The Kapamilya actress first became friends with Liz. "I've known her for a long time. I've known her from my first batch of friends, sina Cheska [Garcia], Danica [Sotto]... And then of course, medyo nag-baby-baby na sila, nagkasal-kasal na sila.

"That's when I started hanging out with sina Isabelle [Daza], sina George [Wilson], Solenn [Heussaff], and Liz moved to this group as well," Anne said in one of her solo interviews.

Are the three ladies going on a date this Valentine's Day?

Liz was quick to say yes. But Anne interjected in a teasing manner, "Naku, hindi totoo iyan. It's her secret to tell, and not ours."

But Liz remained firm, "I don't have a secret to tell."

LIZ'S DATE. Anne's "non-showbiz friend" is camera-shy, and keeps her private life under wraps even if her name has been linked to high-profile men.

First, there's the award-winning actor John Lloyd Cruz, who became her boyfriend. Then, the President of the Philippines, Benigno Simeon Aquino III, admitted to seeing Liz "on a regular basis" in the past.

Of late, Liz is rumored to be dating TV director Lino Cayetano, the brother of Senators Pia and Allan Cayetano.

So, is she dating anyone?

But is she taken?

When asked about her Valentine wish, she replied, "World peace."

GEORGINA'S DATE. George (Anne's nickname for her friend) seemed to be the most reserved among the three.

The Filipino-English model was once the girlfriend of Richard Gutierrez, and is reportedly dating Borgy Manotoc.

Does she have plans for Valentine's Day?

She side-stepped the question by encouraging people to "spend the time with their loved ones."

Does she have a wish for her rumored boyfriend?

"My wish for Borgy..." Georgina began, before segueing to, "[Which] is also my wish for the people I love, is for them to really know what they're passionate about."

ANNE'S DATE. The most popular among the three image models said her plans for V-Day include "work in Showtime. That's my life now."

The female lead of the upcoming film Who's That Girl? is dating Filipino-French businessman Erwann Heussaff, whom she described as "napakamahiyain."

Thus, her wish: "For him to be more confident in front of the camera... He's just very, very shy at the moment kaya medyo protective muna ako sa kanya. But maybe you know eventually, he'll get used to it. But aside from that, wala. I just wish him all the happiness... Yihee!"

Aside from work, the 25-year-old star hopes for something wonderful in the future. But in her solo interview with PEP, she said, "But I'm not gonna be the one who's gonna do the planning, di ba?"

With excitement written on her face, she added, "Wala pa, wala pa."