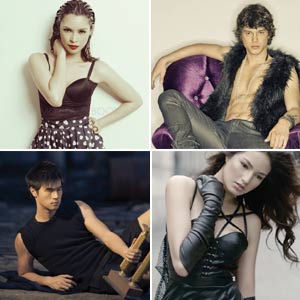 One of the many surprises featured in The Black Book are Ryza Cenon's "sexy" shot, Marvin Kiefer's Adonis-like portrait, and Steven Silva-Sarah Lahbati's "perfect-pair" pose. Master photographer Doc Marlon Pecjo says, "Frankly speaking, we push these artists a bit. We want them to be in pictures that are totally fierce or sexy. "We want clients to see that the artists here can be glamorous, unglamorous, sensual and

It took two years to create and produce, so many hours to coordinate, gather and style more than one hundred talents, shoot them in interesting locales, and assemble a whole battalion of glamour technicians, stylists and the grand artistic vision of one top-notch photographer, Doc Marlon Pecjo, to accomplish the most-talked about and the most ambitious artists catalogue of GMA Artist Center—The Black Book.

According to Ms. Jennifer Donato, assistant manager, events and publicity, "The Black Book is what we present to our prospective clients. In its pages are our drama actors and actresses, comedians and comediennes, hosts, tweens, teens, and child performers, and singers that the GMA Artist Center is currently managing. As you leaf through its pages, you'll see that it is very glossy, super-high-end, and I should say that, looking at the finished product, the photos bring out the best features of a particular artist."

During the May 29 photo exhibit launch held at the Plaza of the Resorts World in Parañaque City, Doc Marlon Pecjo, shares his thoughts about the images inside The Black Book.

"We formulate the concepts based on each celebrity, taking into consideration their image as seen on TV and film, and their personalities also," explains the ace photographer.

"As we go along the way, especially during the actual shoot, the whole creative team, upon meeting the celebrities and chatting with them up close and personal, mas lalong gumagana at naglalaro ang utak nila. Then the styling begins and we do the shoot.

"Frankly speaking, we push these artists a bit. We want them to be in pictures that are totally fierce, or sexy," Doc Marlon continues.

"We want clients to see that the artists here can be glamorous, unglamorous, sensual and provocative. Most of the times, during the photo shoot, lumalabas talaga ang pagka-artista nila. I tell them to play and act their part, and magagaling talaga sila."

THE ARTISTS. Three of the most arresting pictures in the exhibit feature a hotter than hot Ryza Cenon, beatific looking Marvin Kieffer and the congenial pairing of Steven Silva and Sarah Lahbati.

"Steven and Sarah's photo was a spur of the moment idea," reveals Pecjo. "We shot it outside the GMA Network, I just told them to interact with each other as they walk on the road, and then kuha lang nang kuha. Ang ganda ng effect! You can literally feel the wind, and the chemistry they have is just so natural."

Continuing, "The shot with Marvin Kieffer was styled by Carlos Concepcion. We shot inside a super dingy warehouse. Marvin's very angelic face was a great contrast to the background that was so dilapidated. And he was such a professional, walang reklamo sa dumi."

"The pictures of Ryza took me by surprise," admits the master photographer. "We did not expect it to come out as very sexy. During the shoot, she was very game, very flexible and open to all the ideas we were telling her. Talagang she played the part perfectly. Kita mo naman, yung pagliyad niya tapos yung mata niya, it was speaking in volumes. Glad I was able to capture it."

"All of them are so easy to work with so there were no problems," says Doc. "It is very easy to work with the likes of Marvin Agustin, Iza Calzado, Rhian Ramos, Tim Yap, the rest of the StarStruck alumni and yung mga models dati na are pursuing showbiz now."

"Amongst the men, Ian Batherson, Marvin Kieffer, Dion Ignacio, and Gino dela Pena, once you see their photos, you'll know what I mean," adds the photographer.

MORE STARS IN THE BLACK BOOK. PEP.ph had the chance to chat with some of the Kapuso artists present during the photo exhibit, as they recalled their photo shoot experience with Doc Marlon Pecjo.

"Almost half-an-hour ang styling and I think, it took us less than fifteen minutes to do the actual shoot," she remembers with smile. "The pictorial happened a few months ago so when they flashed my photo during the launch, nakakagulat, parang hindi ako, super model kasi ako doon, yun ang emote," Montelaba beams proudly.

For his part, Ian Batherson narrated: "All that Doc Marlon required of me was to take off my shirt and I am happy with the final outcome. I think my photo stands out because it was done in black and white, so there is drama, brooding and pensive ang expression ng face ko."

Batherson's latest TV project is Sisid, which, in a way, brings gloom to the young actor's life.

"I was supposed to be Sigfried, I kept a first draft at home proving that I am Sigfried," divulges Ian who now plays Dexter, Sigfried's (Dominic Roco) best friend. I do not know why they gave it to somebody else, I just found about the change during the actual story conference."

"Honestly, I have no choice but to accept it since work is work. If I am cool with it, kailangan eh. They did not even warn me. Every one else thought I was still the character, so when I turned the page and saw that I am Dexter, it made me sobrang numb, and I have to act as if I'm not affected and masaya doon sa nangyari," Ian smiles wryly.

He ends, "I am taking what happened as an opportunity to improve myself. I know my biggest liability right now is not speaking the language well so I now have a tutor in Filipino. I just recently started and I'm devoting more of my time to learn. I know that good projects will come basta mag-aral ako nang maayos. So, nood kayo ng Sisid and let me know kung maayos akong best friend."

Being one of the super heroines in Captain Barbell is a dream come true for singer Frencheska Farr, but there are more dreams she wants to realize in the near future.

"I want to be a model, star in my own drama series, make more albums, and of course, finish my culinary arts course in De La Salle-Saint Benilde," enumerates the female winner of Are You the Next Big Star?

"I want to be a pastry chef, I want to do something that is totally different from my current preoccupation," the chanteuse continues.

Frencheska shares that, "I love baking cupcakes. My cupcakes are always soft and moist. It's a good thing I don't gain weight easily," she smiles sweetly.

"I like all my pictures, especially the ones which I can describe as fierce, yung mga naka-black ako. Minsan kasi, its fun to do or portray someone, kahit sa picture lang, a persona that is totally different from who I really am."

Capping the chit-chat round is Dominic Roco, "My first photo was pegged sa isang kuha ni Brad Pitt. They showed it to me, so wala akong masyadong choice but to I channel my inner Brad, na madali namang gawin so I told them na ready na ako, so kuha na sila," Roco smiles widely.

"The other one, yung topless ako, pinaghubad ako ni Doc Marlon, then he told me just to walk. Then he started to shooting me, and then when I saw the outcome, wow, panalo ang kuha."