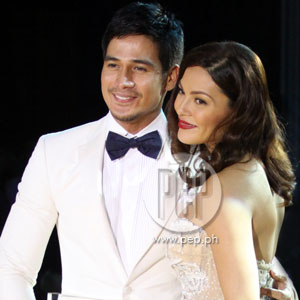 "It was like a movie scene the way I fell for you / Only you, didn't fall /Now it's not like the movies at all." These words from KC Concepcion's song "Not Like the Movies" probably describe her feelings when she finally admitted her breakup with boyfriend actor Piolo Pascual. In the interview, she said, "Masakit man sabihin...siguro nag-fail din ako dahil hindi ako yung kailangan niya sa buhay niya. Or, hindi ako y

But romantic relationships in showbiz are not always as magical as we often see on soap operas or movies.

Unfortunately, some of them also experience "lovers' quarrels," while others have bittersweet endings.

Before we move on to a new year, PEP.ph (Philippine Entertainment Portal) recalls in this list the showbiz couples who gave us the "kilig" feeling at the start but made us sigh out of sadness in the end.

KC CONCEPCION AND PIOLO PASCUAL. This was on the rumor mill for several weeks before the singer-actress KC Concepcion finally admitted on The Buzz that she and Piolo Pascual had already broken up.

It may be recalled that before her admission, there were a couple of times that they were reported to have already split up, but both refused to comment on the issue.

When KC left for Paris last October, more people speculated that her relationship with the singer-actor was really on the rocks.

But no matter how many times entertainment reporters prodded her to talk about the status of her relationship with Piolo, KC was firm in saying, "Malalaman niyo rin sa takdang panahon."

Piolo remained silent about the breakup.

In fact, his only statement about this was, "Hindi naman biro yung pinagdaanan naming dalawa."

RHIAN RAMOS AND DJ MO TWISTER. Rhian and DJ Mo's split was probably one of the most controversial breakups in local showbiz.

The public first knew about it when Rhian posted on her Twitter account last May, "Exactly 1yr of being together, we have broken up. Thank you for loving me. It had amazing moments and I'm sorry.."

After a series of tweet exchanges, there was confirmation: the two celebrities had broken up.

But if people thought the issue between them was good and settled, they were wrong. Many were once again intrigued when Mo posted several entries on his Twitter and Tumblr which talked about "abortion."

He did this after he announced that he was leaving the country for good.

Talk about the "abortion issue" became louder when Mo's video diary went viral on the Net.

In the video clip, he talked about a decision that he and Rhian made last year.

He stated that it was a "horrible day" for him and that the video would remind him about that event in their lives.

Later, Mo defended himself on his Twitter and in an official statement, saying it was not he who uploaded the video.

He also claimed: "Rhian knew about all of this [video]. To a point where months ago, when they thought a lawyer was needed to aid in our breakup, that I was asked to surrender all of this 'proof' (as they called it) to them for it to be destroyed...

"...Along with my files, they took my computer and erased it in front of me."

Following the heated exchange of tweets, their breakup has become even more complicated: Rhian's camp suing Mo, who has flown to New York.

Rhian's final message to her former boyfriend: "These fables and lies will be corrected in court. As this is being made into a PR battle and countless 'final statements,' I'd like to save my efforts for my case... See you in court."

However, PEP included them on this list because, this year, Angelica and Derek faced the biggest test in their relationship—his reported marriage to a non-showbiz girl.

Based on the marriage contract shown on TV Patrol, Derek married his former girlfriend in 2002.

The girl, who was then 21 years old, was identified as Filipino-Indian model Mary Christine Jolly.

Derek has remained mum about this issue. He could have simply denied the story, but he did not.

Instead, when he was first interviewed about it, the TV host-actor's statement was that his lawyers were taking care of things.

"For me, like all the other intrigues that happened every month, I'm gonna focus on my work," Derek added.

Instead of falling apart, the issue has helped strengthen Derek's relationship with Angelica.

In a previous interview with PEP, he also said: "It was never a problem.

"It's just something that they brought up.

"Like I said, it was something that was nine years ago that I have to deal with and it's been dealt with."

At the press conference of his most recent movie, No Other Woman, Derek reiterated that he has always been loyal to his girlfriend Angelica.

Check out the PEP GALLERY to see other showbiz couples whose relationships faced trouble in 2011.