Charice's Preview cover gets slammed for being "photoshopped" 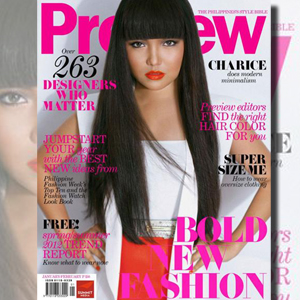 Before readers even got to see its entirety, the latest issue of Preview Magazine has already gone under fire after its cover was posted online.

Graced by international Filipina singing sensation Charice, netizens asked, "Is that really her?"

Some readers took the magazine to task for altering Charice's image with the use of the photo-editing software, Photoshop.

To this, the magazine defends its work:

"The use of Photoshop is a common practice in the industry.

"We don't deny that we did use Photoshop to enhance Charice's photo, but nothing too major as to dramatically alter her features."

The Preview editors also added in their official statement: "If you buy the issue, you'll see that Charice looks the same in all the photos. It's difficult to achieve that consistency with Photoshop."

Charice's transformation, they said, "began on the set, during the shoot," which was supervised by Preview's creative director Vince Uy and his team.

MODERN MINIMALIST FASHION. In the January 2012 issue of Preview, Charice takes on a more sophisticated look: wide-leg trousers, vests, and blazers in white, black, and orange.

The inspiration for the shoot was Bianca Jagger, former model and ex-wife of music legend Mick Jagger, whose signature all-white suits became an iconic look back in the 1970s.

Aside from her clothes, the 19-year-old singer was also given a chic makeover: her hair was styled long and straight.

She was also made to wear clip-on bangs, which made the frame of her face appear longer.

Even her makeup was '70s inspired: solid black liner to trace the eyes and touches of dark shadow giving them a smoky effect.

Finally, her pretty puckers were highlighted with a bright neon orange to match the wardrobe's color palette.

See more of Charice in the latest issue of Preview magazine out in newstands this month.

Preview is a publication of Summit Media, which also publishes YES!, the print affiliate of PEP.ph.