Patricia and Vince Hizon teach their kids the value of giving 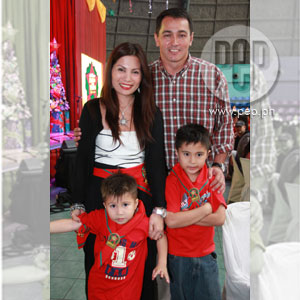 "They know, to some extent, 'yong concept ng less fortunate. Kasi, nakikita nila sa streets 'yong mga bata na nangangailangan. So, I think for them, kailangan talaga na makapag-share because others don't have," said Patricia Bermudez-Hizon about exposing her children to charity projects at an early age. In this photo (from left, clockwise), Patricia poses with her husband, former basketball player Vince Hizon and their children Vicente and Paul Andre.

Patricia and Vince Hizon have been involved in charity projects long before the two met and became a couple.

Patricia, a former courtside reporter, is a founder of an 11-year-old foundation, Everyday Is Your Birthday.

The couple want to pass on their love for social work to their kids.

"So, naturally, 'yong mga anak namin, they [have been] also been exposed to [charity work.]

Patricia said they brought their eldest son Vicente, 6, to a Christmas charity event, when he was just six months old.

They also taught their second son, Paul Andre, 4, to share his toys and clothes to kids who are less fortunate.

Patricia explained, "It's a common practice sa bahay namin. We set aside a certain percentage of [clothes] and toys for the less fortunate.

She added, "I try to make it a common practice sa mga bata, hindi lang sa mga anak ko, to share what they have.

"'Yong mga blessings, not just toys, but also food and their time. They spend time with the less fortunate and they really get to know them."

"Everybody has something to give—resources nila, pera, sometimes toys or whatever they have in surplus.

"But I think, more than anything else, what the kids [in orphanages] need are friends.

"Your time is more important to them than toys or gifts.

"Everyone should make time, make them feel special and try to get them involved in the things you do."

Patricia said their kids call orphans their "brothers and sisters."

It all started with typhoon Ondoy.

"The [kids of] the House of Refuge orphanage, which was then in Provident Village in Marikina, tumira sa amin after Ondoy," she recalled.

"We picked them up from the rescue site dahil wala na nga silang matirahan.

"They lived with us for a long time.

"So for my kids, they're brothers and sisters.

Patricia said exposing her children to charity events and social work at an early age has taught them the value of giving.

She related, "They know, to some extent, 'yong concept ng less fortunate.

"So, I think for them, kailangan talaga na makapag-share because others don't have."