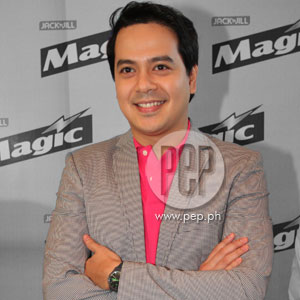 John Lloyd Cruz on renewal of his endorsement contract with Magic Flakes: "I felt really great, to be honest, kasi parang it happened at that time na parang there were certain attacks or major bad press."

No one can't keep a John Lloyd Cruz down.

Despite the controversies that surrounded him last year, the embattled Kapamilya actor remains one of the industry's most bankable stars.

He doesn't have a secret, he says during the press conference of Magic Flakes, which got him again as the brand's endorser before the end of 2010.

It's a matter of accepting the price of fame. John Lloyd elaborates, "It's part of the business. Hindi mo naman puwedeng baguhin yun.

This year, he is set to have "a very exciting movie" with Angel Locsin, "the third installment" of A Very Special Love with Sarah Geronimo, and a possible teleserye with Bea Alonzo.

He stresses, "As you all know, prone to changes 'yan."

And with regard to his reunion project with Bea, "Medyo matagal na kaming hindi nagsasama...So, some parts of the teleserye will be shot in Vienna [Austria]...

THE JOHN LLOYD MAGIC. The award-winning Kapamilya star has been paired with Bea, Sarah, Angel, Toni Gonzaga, including Luis Manzano, and has proven his versatility as a leading man.

He remarks, "Between my partners, each of them, I've been blessed to have onscreen partners...each of us may kani-kanyang kind of chemistry or kind of brand.

"And lahat yun, may kani-kanyang klaseng chemistry or whatever you wanna call it.

"I really find it...it's very interesting, for one, kasi I believe in chemistry, e.

"You cannot create chemistry out of two people, e. It's a gift.

"Kaya siguro, to simplify things, blessed lang talaga to have that with all of these wonderful women. In a word, 'magic,' correct?"

When asked who among his leading ladies is his favorite, the three-time box office king refuses to give an answer.

"I don't wanna be unfair.

And which love team was the most "nakakakilig"?

MAGICAL MOMENTS. The topic shifts to some of his life's magical moments.

First, he mentions his Tabing Ilog days, which he considers "my biggest break."

Lastly, he remembers the people who have always believed in him.

The renewal of his endorsement contract with the cracker brand, for instance, means a lot to the 28-year-old actor.

And whatever controversies that will still come his way, John Lloyd now knows what to do:

"Ang pinakaimpotante, how to show your character...

"So, ang importante is how you give it a fight.