What would Billy Crawford and Nikki Gil do if 12.12.12 is already the end of the world? 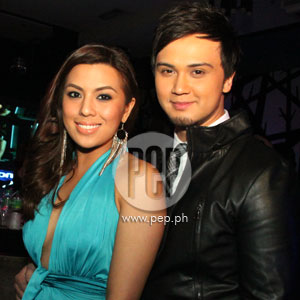 Ang sabi ng dalaga sa isang recent interview, "I guess it starts with one thing: to make it work.

"Eventually you find ways to make it happen.

"We have so many Kapamilyas and Kapuso na hindi sila magkasama, pero they're still a family."

Ang sagot ni Nikki, "But you know it's fine, because Billy's home base will still be in Manila.

Sa hiwalay naman na panayam, ang tinuran ni Billy, "Ang importante lang diyan is the patience and communication we have for each other.

"Yun ang maganda naman ngayon, e—you have PEP, you have Skype, there are many ways to communicate with each other.

"Yes, it's gonna be difficult.

"Pero in life, you have to make sacrifices.

"You can't have everything."

Ang dagdag pa ng Fil-Am singer-TV host, "We have to make it work, regardless.

"Being the man in this relationship, I have to make this work.

"And I want to make this work.

"Hindi naman siya magwo-work if we're not involved with each other."

Ang sabi ni Nikki, "I've never been in one, so this will be a first. But Billy has!"

Sumang-ayon naman agad si Billy, "I have. It ain't easy, but it wasn't the same.

"I'm 29 years old, so I think I grew up matured and I feel good with this relationship."

Ang kuwento ng Kapamilya host-singer, "You know, I grew up in a family where my father used to be gone two years at a time.

"So imagine for me na kung four to six months na umaalis ako, what's that compared to two years right?

"If my father and mother has been married for over 30 years, so it will work!"

"Of course, that's why very important yung foundation and trust."

WISHES FOR EACH OTHER IN 2012. At ano naman ang mga inaasam nilang mangyari sa taong ito?

Ang masayang sabi ni Nikki, "I wish that his endeavors in France and this new chapter in his life, this gamble that he's taking, hopefully the odds will be in his favor.

"And that his career in France will flourish.

Ang pahayag naman ni Billy, "For me I wish her, not that kulang, pero I think what she's capable of doing—I wish that she will reach that goal that she's been wanting for a long time.

"And the recognition that she deserves as a performer.

"I hope this year she will be more patient and I wish her all the best, really.

"I pray for her success and patience towards me, towards life, and towards the business.

"I have a feeling that this is gonna be a good year for everyone."

Sabay sabi ni Billy, "That's what I was thinking of."