Melissa Ricks tries something new this year: being kontrabida! 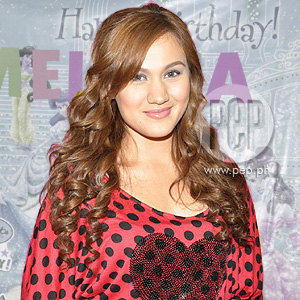 Young actress Melissa Ricks is up for another challenge in her acting career this year.

In the upcoming ABS-CBN TV series Walang Hanggan, the former Star Circle Quest runner-up will be portraying a kontrabida character for the first time.

"I wanted kontrabida role," she told PEP.ph during her McDo birthday party prepared by the fans club Melicks last January 8, on Quezon Avenue.

Melissa said she really asked for this role from ABS-CBN management because, "I felt na it's for me. I think 'yon ang forte ko, e.

She refused to describe her role in detail, but she was certain that "it's really far from my character."

The Star Magic talent added, "I get to play somebody that I am not and it's fun...I just really like it!"

To elaborate, "It was a chance to reinvent myself nga and show people na aktres ako.

"It was a role na I never thought na tatanggapin ko.

"Pero ABS-CBN gave me a chance to do a role...marami namang puwedeng gumanap as Elisa but they chose me so, I'm very thankful."

And she did not disappoint.

Her series became consistently part of the the top ten during its run, based on the TV ratings of AGB Nielsen and Kantar-TNS.

"Pero as the story went on, maraming kumapit, maraming sumubaybay.

What can the viewers expect from its last few episodes,?