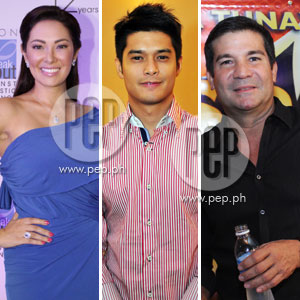 (L-R) Ruffa Gutierrez, JC de Vera, and Edu Manzano are some of the TV5 stars who will take part in "Sugod mga Kapatid Sa Sinulog 2012."

TV5, together with its sports channel AKTV and 24/7 news platform Aksyon TV, are all set to celebrate Sinulog Festival in Cebu, with a week-long event titled "Sugod mga Kapatid sa Sinulog 2012."

The game series held in San Roque and USC (University of San Carlos) football fields. will be aired on Saturday, January 14, on AKTV on IBC.

From January 9 to 12, at 1:00 to 5:00 p.m., the Kapatid network will hold open TV viewing marathon at the Fuente Osmeña Circle highlighting the shows Glamorosa, PS I Love You, Pinoy Explorer, and Talentadong Pinoy.

Talentadong Pinoy is slated to hold auditions at Fuente Osmeña Circle on Thursday, January 12, from 4:00 to 5:00 p.m.

It will be a gathering of the brightest Kapatid stars, such as Ruffa Gutierrez, Wendell Ramos, and Edu Manzano.

Come Sunday, January 15, NEWS5—the news and information division of TV5—will cover the main festival's event to be aired on Aksyon TV from 8:00 a.m. to 8:00 p.m.

Aksyon TV can be viewed on Channel 41 in Mega Manila, Channel 29 in Metro Cebu and Davao, Channel 1 on Cignal Digital TV, and Channel 59 on Sky Cable.