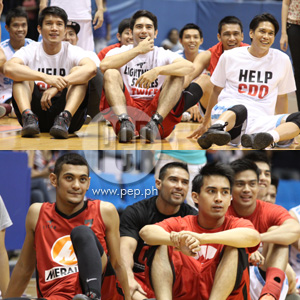 Celebrities like actor Gerald Anderson and court star James Yap joined Fastbreak, a basketball game for the benefit of Sendong victims, on January 6. The successful event was organized by UAAP player Kiefer Ravena.

Celebrities and basketball players came together and made Fastbreak, a charity game for the victims of tropical storm Sendong, a successful event.

Basketball and non-basketball fans, including PEP.ph (Philippine Entertainment Portal), had a great time at the San Juan Arena last January 6, as stars entertained the audience with what turned out to be a basketball exhibition rather than an actual game.

Giving the event an unexpected twist was the comedic act of Jose Manalo and Tado.

TV host-athlete Chris Tiu was one of the most-anticipated players.

Most applauded among the collegiate ballers was the guy behind the event: UAAP Rookie of the Year Kiefer "The Phenom" Ravena.

Spotted in the audience were box-office star Vice Ganda and couples Valerie Concepcion and Dondon Hontiveros.

The game ended with Smart White winning against Meralco Red, 118 - 107.

GAME HIGHLIGHTS. With a collection of different personalities who are all stars in their respective fields, it was not your typical basketball game.

The show was a friendly gesture which delighted the fans who paid to watch their favorite stars play.

Proceeds of the game would go to our kababayans in Cagayan de Oro.

Jhong Hilario earned cheers from the crowd as he showed his "sample" exhibition moves, doing backflips and other stunts while dribbling the ball before making free-throw shots.

Young Jvee showed his dance moves while making baskets. At the end of the game, he was one of the lead scorers of his team, Meralco Red.

Sending the message that it was a friendly game and not a competition, Ravena even assisted an alley-oop going to the opposing team's Nico Salva.

The arrival of Gerald Anderson, who came late in the first half for the Red Team, had the crowd, especially the females, cheering the Budoy star to take a shot every time he had the ball.

Comedian Tado, probably the least athletic of all the players in the court, was up to his usual antics and even made a shot with his shorts pulled down to his knees.

But what made the fans really laugh was the late entry of Jose Manalo in the third quarter, what with Jose doing an impersonation of Gerald's TV character, Budoy.

Pulling his shorts up and imitating the famed character's emblematic actions, everyone at the arena had a good laugh when Jose recited the famous line, "Ako Budoy!"

Then Budoy himself, Gerald Anderson, walked to the center court and protested, "Hindi, ako Budoy!"

This left the audience rolling with laughter.

The Red Team led through most of the game, until Jose took his place as one of the referees in the second half, sporting the White Team's jersey.

He unjustifiably gave some possessions to the White team and even turned a three-pointer by Chris Tiu into four points, none of which offended anybody, but instead had everyone at the arena laughing.

HALF-TIME FESTIVITIES. The half-time break was also full of activities.

Members of the audience competed in a "Dougie-dance" showdown.

The two-ball contest was won by Ervic Vijandre and Champ Lui Pio against the favored pair of Chris Tiu and Letran Knight Kevin Alas.

The winnings were donated to CDO under the victors' names.

COMING TOGETHER. In the aftermath of tropical storm Sendong, many individuals and organizations have mobilized to help the victims in CDO.

Kiefer Ravena is one of them.

What started as a Facebook status expressing his desire to help by putting together a charity game spread to Twitter and earned the support of players, celebrities, and fans.

Most of the basketball-playing celebrities did not think twice when they received the invitation.

One of them is Survivor contestant Jon Hall.

He said, "Well, a friend of mine invited me to play for the charity game.

"Mahilig kami sa basketball, we play all the time so, why not, di ba? For a good cause."

Hale lead vocalist Champ Lui Pio, who considers basketball his main form of exercise, shared, "I got invited. We all play regularly and they mentioned about this good cause so I said, why not?

"Since we're far away from CDO and Iligan, this is our own little way of helping."

Some of them were invited through Twitter, like Jhong Hilario, who said, "Na-invite ako ni Mr. Kiefer Ravena.

We asked Praybeyt Benjamin star Vice Ganda how he helped out in the event.

When Vice arrived at the venue, Kiefer presented him with a jersey and an invitation to play on the court.

FOR A CAUSE. The athletes and celebrities who participated in the event said it felt good to play basketball and help at the same time.

At the same time, he saw the event as a way to make the fans happy.

"And, of course, it's also a fun event. Makakalaro ka with other basketball players, mga artista, mga rock stars...

"Plus, we're gonna make the fans really happy and excited to see their idols, kaya ako nandidito," he said.

Gerald Anderson agreed. He said it was more fun playing basketball, knowing it's for a good cause.