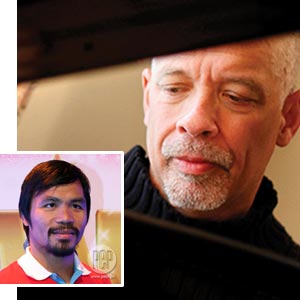 "I think pop singing is all about personality. You have to believe what the singer's saying. You believe his emotion to be true. Or, are they honest? With Manny, I believe everything's the same and for me he's a very effective singer," says Dan Hill (main photo) about Manny "Pacman" Pacquiao (inset) as a singer.

The man behind the classic ballad "Sometimes When We Touch," thinks Manny "Pacman" Pacquiao is "a really, really good singer."

"I think pop singing is all about personality. You have to believe what the singer's saying. You believe his emotion to be true. Or, are they honest?

"With Manny, I believe everything's the same and for me he's a very effective singer," adds Hill about the 8-division champion boxer's style of singing.

"It is a combination of old and new songs that I recorded," he says. "Some of these records, no one has ever heard me sing before."

Hill released his first album in 1975 and had his first U.S. Billboard Top 10 hit (climbing as high as number three in the music charts) in 1977 with "Sometimes When We Touch," which was released as single and as part of Hill's third album Longer Fuse.

Dan also found success in writing songs for other artists.

"Some of them [songs in Intimate Dan Hill] are songs that I wrote, that were hit songs by other artists. It is the first time that I recorded it.

"For example, 'I Do (Cherish You),' it's a hit song by 98 Degrees. 'I Promise You (With Everything I Am)' was a big song by The Backstreet Boys, or 'Seduces Me' is a big song by Celine Dion. So, it's a combination of new songs, plus hit songs that I wrote for other artists."

"SOMETIMES WHEN WE TOUCH." Recently, Dan's monster '70s hit, "Sometimes When We Touch," made it to two music charts.

Was he thrilled to know that "Sometimes When We Touch" is one of the Pacman's favorite songs?

"Yeah. I was very honored. Because I'm a huge, huge fan of Manny Pacquiao.

"Not just a fan of his boxing, which is supposed to be his legacy to the world, but as a human being, as a congressman, as a person.

"He really, really wants to make the world a better place. To get rid of poverty. Especially, considering his background."

Pacquiao, as the whole world know by now, had a poor and tough childhood, and made his "rags-to-riches" life story through boxing.

IMPRESSED BY PACMAN. Hill relates he was really impressed when he watched Manny singing his song in Jimmy Kimmel Live in November 2009.

"I was very impressed with how clear his delivery was, how touching he was. And how a guy, that could be such a powerful man, is not afraid to show his tender, dramatic side.

"So, I reached out to him. And told my management to contact his handlers, and we had a meeting in New York and we agreed to make a record together, a video and a documentary about how we became friends and the works."

Dan also reveals the album comes with a bonus DVD of the said documentary he shot with Manny.

MORE FROM HIM AND MANNY. And this is not the last of his collaborations with the boxer.

"We're talking about making an entire CD, where I will be contributing as a songwriter.

"It's gonna be a combination of songs that I've already written. I think he's interested in a song called '(Don't Tell Me) How I Feel' which is a duet in my album Intimate.

"I'll also be doing a concert with him on November 15, in San Francisco," adds Dan.

Are there also plans for him to promote the album or do a concert in the Philippines?

"I will be touring the Philippines in February," Dan announces.