Priscilla Meirelles reveals how pregnancy made her world "turn 360 degrees" 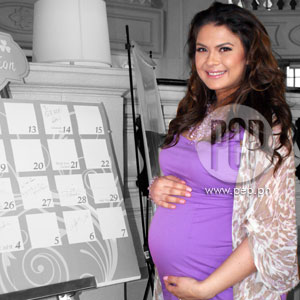 Expectant mom Priscilla Meirelles talks about her experiences: "The first time my baby kicked, that was in four to five months, it's like my world turned around 360 degrees, and that's when I realized I'm becoming a mom."

Even with her prominent baby bump, Priscilla Meirelles-Estrada still looks lovely in her lavender cocktail dress.

On January 22, a baby shower was thrown for her soon-to-born baby girl Anechka at the Manila Peninsula Hotel in Ayala, Makati City.

Priscilla is now on her eighth month of pregnancy, and is due to give birth on February 4, exactly a week after her first wedding anniversary with husband John Estrada.

In an exclusive interview with PEP.ph (Philippine Entertainment Portal) during the English tea party-inspired baby shower, she recounted how John picked Anechka as the name of their baby girl.

And how does she feel now that she's going to be a mom a few days from now?

"It's amazing," she began. "You know, I cannot really describe the feeling, you need to go through it to know. Now, I understand more where my mom comes from always."

Her mom Marcia, who flew all the way from Brazil last December 23, will stay until mid-April to give "support" and "help out" her pregnant daughter.

Priscilla related that her mother is "not really makulit when it comes to everything.

"She didn't really say much, as of now she's supporting me and giving me what I need.

"But I know when that time comes, she'll really give that advice that I need.

"That's really good because I could lift how good mother she is to me."

GOD'S TIME. Initially, her plan was to have a baby a year (not four months) after her wedding.

But things happened, she said, in "God's time."

She continued, "A, well 'yong sa totoo lang, I was not really planning for [the pregnancy] any time soon.

"Kasi lagi ang dream ko talaga is to have my own family kaya I got married, I was settling down, and everything...

"Pero, sa plans ko for one to two years after ng wedding ko, that was February [ako mabubuntis].

"So I have other plans. I have plans before getting pregnant, kasi I knew that once I get pregnant that's all I can do, be pregnant.

"E, 'yong mommy ko din, 'Dapat you get pregnant na para, you know, I can have my first grandchild na!'

"Sabi ko sa kanila, 'Wag naman kasi mas maganda if, you know, enjoy muna our marriage and I was setting up for business.

"But God's time is the perfect time. He gave me before I was planning."

She was at first in denial. But slowly, the feeling and the thought of becoming a mother began to sink in.

"When I found out that I was pregnant, I was like, 'No, it's not true," she related.

"Baka something's wrong, and then because I really take care of myself, it's fine that I relax a little bit, but it's not that much for me to get pregnant, I was always cautious.

"Pero sa totoo lang, I was married na, when you get married you get a little bit more relaxed.

"The first time my baby kicked, that was in four to five months, it's like my world turned around 360 degrees, and that's when I realized I'm becoming a mom.

"I want to become a good mom."

AFTER PREGNANCY. Priscilla has already made plans for herself after she gives birth to Anechka.

"So, after I feel na okay na, I'm just not sure right after [I can work already] because [with the] baby, you need to give a full attention.

"So, maybe for now, my focus is my baby and then, yeah, I'm going back to work and if it is meant to be showbiz, it's gonna be showbiz.

"It's not the only business, we are a business-oriented family, we have a lot in mind, even before I got pregnant.

"Even before I got pregnant, actually, I was setting up a business in the Philippines.

"We actually want to go for a food business, you know like restaurants. But, I have in mind some other things that's from Brazil that I want to bring here in the country that are new stuff, so, that's what I've been doing all these time.

"But because I got pregnant I needed to stop all the plans, and for a while I'm becoming a preggy mom."

John has been in the limelight for more than 25 years, while Priscilla is a former beauty queen, what if their daughter follows the footsteps of her parents?

"You know, I'll support her all the way in whatever career or profession she choose," she answered.

"I'll tell her every pros and cons of whatever career she choose.

"If she wants to join showbiz or beauty pageants, I hope she'll have a very good and blessed path to go through, I've seen both of them.

"It's such an honor to be a part of such career.