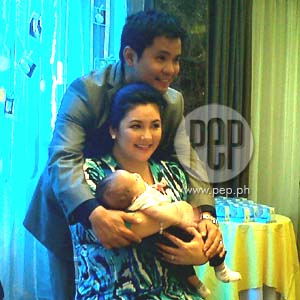 Ogie Alcasid, Regine Velasquez, and their two-month-old bundle of joy Nathaniel James posed for a pretty family picture at the party they threw to celebrate the latter's entry into the Christian world.

On January 22, Ogie Alcasid and Regine Velasquez threw a dinner party to celebrate a new milestone in the life of their son.

Nathaniel James, who is now more than two months old, was welcomed into the Christian world.

Earlier that day, Baby Nate was baptized under Catholic rites in a ceremony held at the Don Bosco Church in Makati.

Ten pairs of Ogie and Regine's friends in and out of showbiz were named as the child's godparents.

Michelle Van Eimeren-Morrow, the first wife of Ogie, was also one of the godmothers. She however missed the ceremony as she is currently based in Australia with her new husband and her two daughters with Ogie—Leila and Sarah.

A dinner reception followed at the Cravings Restaurant in Quezon City.

It was an intimate affair attended by the couple's relatives and closest friends.

Celebrity couples who were spotted at the venue were Jaya and husband Gary Gotidoc, newlyweds Jolina Magdangal and Mark Escueta, and singers Dingdong Avanzado and Jessa Zaragoza.

THE PARTY. The banquet hall was dressed up by event stylist Badang Rueda, the same artist responsible for the serene look of the couple's 2010 wedding.

Colors of the day were white and baby blue, and the room was filled with everything cute and cuddly .

"For this occasion I wanted talaga mga pastel colors," said Rueda, who was given liberty by Ogie and Regine to come with the perfect look for the event.

He used the theme of Baby Nate's first pictorial as the design's inspiration.

All tables in the house had the same centerpiece—a pot of fresh wheatgrass, flowers, edible cookies shaped into the letters N, A, T, and E, and some printed photos of Baby Nate.

The tiffany chairs had Tiny teddy bear keychains, to put a touch of "childlikeness" into the decor.

The cake also bore the teddy bear's image, and was surrounded by a candy buffet station—which had marshmallows, chocolate pretzels, and lollicakes.

Most guests left with a box full of candies, a chocolate cupcake with white chocolate teddy bear topping, and a CD containing five songs recorded by Nate's proud parents.

Regine gave a fresh new spin to songs "Angel of Mine" by American singer Monica; "God Gave Me You," a contemporary Christian track originally performed by Dave Barnes; and "You're So Amazing" by American soul singer Janelle Monae.

For Ogie's part, he sang "Someone's Waiting For You," a famous children's song featured in the 1977 Disney animated film The Rescuers.

The couple also did a duet of Bruno Mars' hit song "Just The Way You Are," which was used in the video presentation, which showed snippets of Regine giving birth to Nate and a collage of family's photos in the last two months.

Nate's party lasted for about three hours, and that was just the prelude.

His parents are preparing another gathering after Baby Nate's Christian dedication on February.