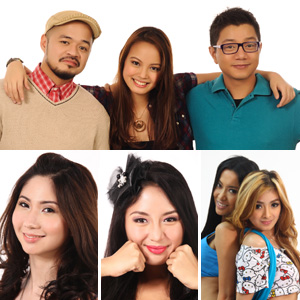 It was a lively evening of music, fun games, and overflowing booze at the 7th High Bar in Bonifacio High Street, Taguig City last January 25.

Promising a dynamic blend of entertainment and interaction, the online video channel now includes four programs to be hosted by a mix of hip and youthful hosts.

The feisty trio of radio jockeys Rico Robles, Jessica Mendoza, and Mojo will be discussing the latest buzz or "trending topics" on social networking sites such as Twitter and Facebook in Talking Heads, slated Tuesdays and Thursdays from 8:00 to 10:00 PM.

The idea of the show is to combine RX 93.1's DJ Rico with Magic 89.9's DJs Jessica and Mojo, and to hear them discuss the current issues, talk of the town, or up-to-the-minute hashtag items.

The sizzling combination of Mocha Uson and Mae dela Cerna of singing act Mocha Girls will lend their "sex-pertise" in Mocha Blog Live, which is scheduled from 10:00 p.m. to 12:00 a.m. every Tuesdays.

With flair and fanciful satisfaction, the two co-hosts will daringly offer their advice and acumen on romantic relationships and explicit "bedroom and beyond" subject matters.

The sultry FHM poster girl and RX 93.1 radio jockey Karen Bordador will host Happy Endings on Mondays, Wednesdays, and Fridays from 8:00 to 10:00 PM. The program will feature celebrities and up and coming personalities who will get to "hang out" with the lovely VJ Karen.

The program's episodes which had actually aired prior to this official launching, featured the Philippine Rugby Volcano players and "Pinoy Boy" YouTube sensation, Mikey Bustos.

Ashley's Playlist, which will be aired on Thursdays from 10:00 p.m. to 12:00 a.m. will feature the angel-voiced Ashley, who is also a talented guitarist herself, jamming along with today's hottest local bands and artists. Her show which has, in fact, also started airing, featured rock bands Mayonnaise, Spongecola, Stonefree, and Silent Sanctuary.

The blazing event was hosted by the DJs Rico, Jessica, and Mojo which led a high-spirited bunch of party-goers in fun-filled games.

Music was provided by artists from Timbaland Productions—RnB singer-dancer Brenan, the sexy Mica Javier, and the Filipino-American artist Amber. Further electrifying the stage were performances by OPM rock stars Mayonnaise and Stonefree.