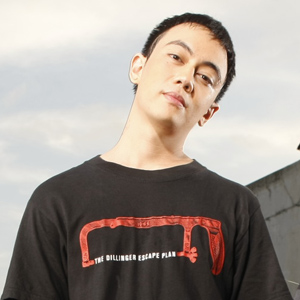 Surprised to see rock star Miggy Chavez playing a cameo appearance in Segunda Mano? Well, it's not that much of a shocker, really, as he does have a bit of showbiz in his blood. Miggy is actually the grandson of veteran actress Ester Chavez. The singer says he'd be willing to do more mainstream projects in the future; but he'd also like to go into tattooing when he's not busy writing and playing music.

He played the car driver, whose reckless actions eventually set the movie's plot into motion.

Although it's not his first time to act in front of the camera—his band's music videos sometimes require acting—he considered his Metro Manila film Festival stint a refreshing experience.

In an interview with PEP (Philippine Entertainment Portal) on January 13 at Eastwood Central Plaza, where his band did a show to promote the compilation album 90s Music Comes Alive, Miggy said,"It was like me going out of my comfort zone, but it was fun.

"I had fun naman kasi it was something I normally wouldn't have done, but I liked it."

"Kung may mag-offer ulit in the future, 'di ba, why not?

"But if may mag-offer and I think I can do it, and it's not naman a super corny project, then, why not?"

The downside of it: long hours of work.

According to him, he had been idle on the set for quite sometimes before he was called to do his scene.

"It was hard, like, super tagal namin doon just for that 30 seconds na screen time," he said, thinking that he should have asked some advice from his grandmother, veteran actress Ester Chavez.

TATTOOS ANSD KICKS. Apart from playing and making music, the 30-year-old Miggy is also passionate about sneakers and tattoos.

In his Tumblr blog, the singer-songwriter would usually post photos of his favorite kicks, most of them are Nikes under the Michael Jordan or SB (which stands for skateboarding) brands.

PEP asked him on Twitter how many sneakers he currently owns, and Miggy replied, "Haven't counted em, but I do know that I don't own half as much as I'd like to! :))

"And I'm pretty sure I have more SBs than I have Jordans..."

Some of his artworks can be viewed via his blog, where some fans lift the designs for their own tattoos.

A female fan recently sent him a photo of her tattoo, a woman's face with spider legs—one of the artworks that Miggy posted on his blog.

Speaking of getting inked, the musician has several tattoos on his right arm.

His reply: "I have no love life to speak of.

And the reason why he chooses not to have a girlfriend right now is his career.

The band ChicoSci is currently in the process of writing and recording a new album, which is expected to be released this summer.

"You know, kasi tumatanda na 'ko so the window of opportunity is getting smaller, so eventually, we'll have to settle down.

Besides his music, Miggy also plans to spend more time in learning and practicing the ropes of tattooing.

From simply creating designs, he'd also like to do tattoos himself and maybe put up his own shop in the future.