Jeff Timmons, a1, and Blue sing "greatest hits" at the Big Dome 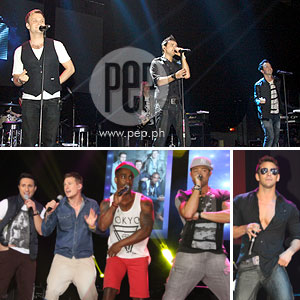 Those who lived through the '90s will surely remember the songs of a1 (top frame), Blue (lower left), and Jeff Timmons (lower right) of 98 Degrees.

Kids from the '90s—including a new breed of fans—trooped to the Big Dome last Saturday, February 25, to take a stroll down the memory lane with 98 degrees' Jeff Timmons, a1, and Blue.

The boy-band era—characterized by the members' charm and good looks, not to mention the seamless blending of their voices and choreographed moves—was instantly revived.

And though it's been a decade since they last performed before the Filipino crowd, nothing much has changed. "Ang guguwapo niyo pa rin!" the fans screamed.

JEFF TIMMONS. In a pre-concert press conference held last February 24, the co-founder of 98 Degrees stated that going solo did not give him that much pressure because there's so much talent surrounding him.

Jeff's performance was musically directed by Jay Durias and South Border, which also served as the former's back-up singers.

After much anticipation, a voice prompt introduced the former band mate of Nick and Drew Lachey, and Justin Jeffre.

"He is a member of the vocal group 98 Degrees. He released a solo album in 2004 Whisper That Way, and is expected to release a new album this summer.

Jeff then came out so full of energy wearing a black half-unbuttoned polo, exposing his chest, and dark faded jeans.

He shouted, "Everybody put your hands in the air, wave it from side to side, let's go. Come on Philippines!"

The crowd obliged, then got excited upon hearing:

"You're my sunshine after the rain/

You're the cure against my fear and my pain/

And I'm losing my mind when you're not around/

For the Pinoy favorite "I Do (Cherish You)," he picked out a girl from the crowd and dedicated the song to her.

After the number, he gave the lucky lady a hug and said, "Thank you very much."

Also included in his repertoire: his 2009 single "Emotional High" and a cover of Ne-Yo's "Closer."

Before the finale, he said, "This is the first time I'll be doing something like this... But I said I'll do it on one condition.

"Knowing that the Philippines has amazing musicians and great singers, artists, entertainers... I said, I had to have a band and some singers that [are] absolutely kick-ass!"

Jeff then belted out "Rainbow."

He remarked after the segment, "I can tell you, this is no exaggeration. This comes from one hundred percent of my being: what an honor for me to sing that song.

"Thank you for letting me sing that song... I don't do quite the justice that you guys do but thank you so much."

His last song was "The Invisible Man."

A1. There was a 30-minute technical break to give way to the next band's preparation.

By the time the video presentation showing old album covers and pictures was shown, some people were already shouting.

Their opening song was "Same Old Brand New You."

Mark Read greeted, "How are you doing tonight, Manila? Oh, it is so good to be back! Are you ready?"

A resounding "Yes!" was the reply he got.

"It's been ten years since we've been here and we're gonna make this the best night ever!" Mark shouted before proceeding to their next song: a medley of "Be the First to Believe" and "Summertime of Our Lives."

Next, they performed "Take You Home," "a brand new song from the new album Waiting for Daylight."

This was followed by the sentimental song "Everytime," which had Ben Adams waving his hands in the air playfully while waiting for his part.

Towards the end of the song, they made the audience sing along to some lines of the last chorus.

For the next piece, "Ready or Not," the group did their classic dance moves, which endeared the group to the fans.

Afterwards, Ben asked, "Does anybody have a suggestion of a song you want us to do?"

Mark joked, "Did you get that?"

To give in to all their requests, they sang a medley of "One More Try," "Living the Dream," "I Don't Want to Hear No More," "Heaven By Your Side," "Walking in the Rain," and One Last Song."

Next, they went on to render their version of Lady Gaga's "Poker Face" followed by Black Eyed Peas' "I Gotta Feeling," plus, their own single "Waiting for Daylight," which was released just last year.

Before the next song, Ben called the attention of the camera man and asked him to go onstage.

"I feel like you guys are so far away from me," he told the audience, then facing the camera, he said, "So I want you to take this really close to my face while I'm singing."

And the song he was reffering to: "Like a Rose."

After their performance, Mark started talking about their Filipino names.

"My Filipino name would be Macoy," he said, prompting laughter from the crowd.

"Or Mac-Mac!" Christian Ingribigtsen threw in, before adding. "I think my Filipino name would be, Chan-chan!"

The Big Dome roared with laughter.

They moved on to their final songs, "Caught in the Middle" and "Take on Me," which had most people dancing.

BLUE. The stage was set up anew for the last act, which began with "Sorry Seems To Be The Hardest Word."

Next, they sang "Breathe Easy, " followed by the more upbeat "You Make Wanna," which had them showing off their signature synchronized dance moves.

They turned, exchanged places, and made snappy movements with "If You Come Back."

Then they "jump, jump, jump" with the hip-hoppier "All Rise."

More dancing ensued when they performed "Too Close," which ended with an a capella blending of their voices.

Lee even tried to sing a1's "Like a Rose" while handing them out.

For his part, Duncan asked, "Who's gonna be my Valentine?" He kissed the rose before throwing it to the crowd.

Antony invited the people support them, "Guys, we just want to say thank you. Our new album is coming out later this year. So you can follow us on Twitter @officialblue."

For their finale, they chose "One Love" with their fans.

Indeed, it was a night of greatest hits...and great music!

Read Next
Read More Stories About
a1
Celebrity Updates