PEP gives high five to all! 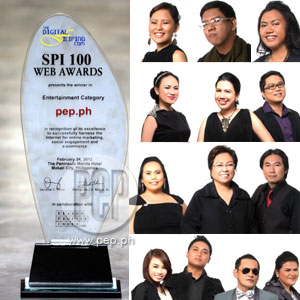 A few days before February 28, the anniversary date of PEP.ph (Philippine Entertainment Portal), we were hailed the best entertainment website by the SPI 100 Awards and DigitalFilipino.com. To celebrate this feat (and our birthday, of course!), the group decided to ask the stars for gifts, which will be given to lucky PEPsters. Happy birthday to all of us! Here are your PEP Presents...

We remember the time when PEP was just an idea.

Our site had only 15 articles.

Our first story—uploaded by Jocelyn Dimaculangan—was about Raymart Santiago, and it carried the title, "YES! was wrong."

It generated our first comment that came from a baffled reader who happened to be surfing the Net: "Akala ko ba partner kayo ng YES! magazine?"

We remember the first press conference we attended.

It was right after Typhoon "Milenyo" and it was for a clothing brand endorsed by Iza Calzado.

When asked about the "publication" she worked for, writer Candice Lim explained what PEP was all about.

Her explanation was longer than Iza Calzado's interview quotes!

And despite Candice's detailed description of the site, people had to ask: "Ano nga yun?"

It happened nine days after we first launched the site.

Our editor-in-chief Jo-Ann Maglipon wrote a story about Gretchen Barretto, and the title carried a quote from the controversial star. "Don't call me prima donna" certainly captured the public's attention.

Fast forward to 2012, www.pep.ph is now a one-stop shop for anything showbiz—scoops, exclusive interviews, features, opinions, galleries, podcasts, and videos about stars and facets of their life.

There are now 26 full-time employees—who, routinely, skip meals to write a breaking news item, forego sleep just to read comments, sacrifice holidays to cover an event, and miss special occasions to be with the stars.

To date, we've uploaded or published over 455,000 articles—thanks to our contributors, talent managers, publicists, and sources that have been helping us produce stories with speed, accuracy, and fairness.

Since we started, we have received over 2.5 million comments—or about 1,400 opinions per day. Except for a few posts, which, according to some stars, are rude and ruthless, majority of the comments have either amused or amazed showbiz aficionados all over the world.

Five years after creating PEP, we realize our task is not as simple as we first thought.