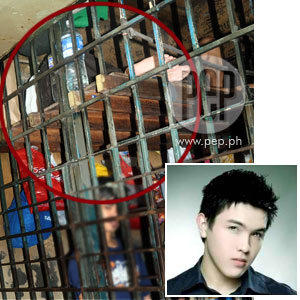 Ramon Joseph "RJ" Bautista was asleep on an elevated portion of a cramped detention center when PEP.ph (Philippine Entertainment Portal) arrived at the Parañaque Police Station for Investigation and Detention (SID) early this morning, November 4.

The 18-year-old son of former senator Ramon Revilla, Sr. has been tagged as the mastermind in the slaying of aspiring actor-politician Ramgen Revilla.

RJ has been behind prison bars since the evening of November, Tuesday, and has since refused to face the media for interviews.

With him in a poorly ventilated, approximately 4x4 square-meter jail were 86 other prisoners, which also include Michael Cruz Altea and Roy Francis Tolisora, allegedly the hired killers of Ramgen Revilla.

Altea and Tolisora were impossible to identify as they blended in the overcrowded room of men and women prisoners.

"CONFIDENT." Meanwhile, at the Parañaque Police Headquarters a closed-door case conference was ongoing.

Approached after the conference, Senior Superintendent Bill Beltran, Parañaque chief of police, made a brief statement to PEP to address criticisms about the quick pace of police investigation of the Ramgen Revilla murder case.

"If not, she'll ask us to release all the suspects that [are] detained.

"We're confident with the way we handled the investigation.

"We were thorough, we were diligent, we believe that we have enough.

"And that is what we submitted doon sa ating korte, sa ating prosecutor for her evaluation."

CASE MOVES TO CLERK OF COURT. Assistant Prosecutor Roma has, in fact, forwarded the case to the Parañaque clerk of court as of yesterday afternoon, November 3, Thursday.

The case, which is now in the hands of Parañaque Branch Clerk of Court Jerry Toledo, will be raffled among the city's judges.