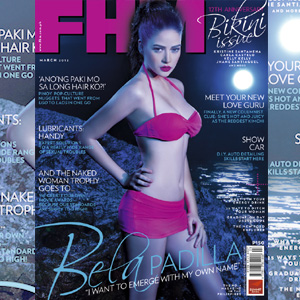 Read more about Bela Padilla in the March issue of FHM, a 12th Anniversary Special and also a Bikini Issue. FHM is available in newsstands, bookstores and convenience stores nationwide for P150.

Sometimes, it's all in the name.

This is something Bela Padilla knows all too well, after being launched as Krista Valle and, later, Krista Sullivan, cast in the shadows of other Kristas in the business.

Now, she takes the spotlight by making her debut on the cover of the 12th Anniversary Special of FHM thisMarch.

As the "Padilla" in her name stems from being the niece of Robin Padilla, Bella tells FHM, "I feel like I'm in everyone's shadow; pamangkin ni ganyan, kamukha ni ganyan, inaway ni ganyan.

"So I want to emerge finally with my own name. I'm Bela now... I want people to see that whatever they require of me I can give."

While posing on the cover of FHM may be one of Bela's biggest career moves, she is quick to say that this doesn't mean that she's going to be very visible.

Her pictorial shows a curvier Bela, and she says that she intentionally added a few pounds.

"Meaty legs, big boobs, big butt—that's sexy for me," she says, pointing to Hollywood legends Farrah Fawcett and Bo Derek as her idols.

"We live in an age where women need to be stick-thin but I don't find that too sexy. I want the traditional sexy, I want to put shape into the clothes."

Sexy roles for new projects like a beer commercial or a liquor calendar usually come after posing for the cover of FHM.

In the interview, Bela makes it clear that if there is one thing that she does not want, it's to look like she's "seducing people."

"I don't want to give that idea ever," she adds.

Prior to the height of controversy behind her original cover for FHM, Bela had already expressed in the interview that she considers this an accomplishment and says, "I'm so proud with what we did. I want you to know that I will back up this issue. This is something I could show my grandchildren."