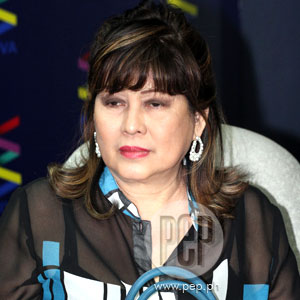 "Because of the malicious attribution and implication that I was involved in an illegal activity, it is with no doubt that my reputation, honor, and virtue was tarnished and destroyed," says talent manager Annabelle Rama in her complaint-affidavit for the libel case she filed against young actress Ynna Asistion and tabloid editor Janice Navida.

"I am an artist and talent manager by profession who manages the business concerns and careers of various entertainment artists, and part of my duties and functions is to handle any and all negotiations and contracts between my clients and producers or companies who wish to engage their services.

"As an artist and talent manager, my actions have always been under the painful scrutiny of the public and subjected to the discriminating eyes of my critics.

"This reality, however, never daunted nor dissuaded me from continuing to live a life in the service for others for I have vowed to direct all my efforts and actions to help improve the careers of each and of my talents, a difficult feat, but certainly not out of reach.

"As an artist and talent manager, my reputation is of utmost importance to me. Certainly, no artist would even dream of being managed by a person known for her questionable character and integrity. It is for this reason that I have always been prudent with my actions and even if there were certain instances when the public would somehow disapprove of my actions, I still believe that it was definitely called for and within the bounds of law specially to protect the interest of my talents.

LIBELOUS STATEMENTS. "On 01 February 2012, while at my residence at 2170 Paraiso Street, Dasmariñas Village, Makati City, I was shocked and dismayed to read an article in BULGAR, a newspaper of general circulation, to which respondents caused the publication of libelous statements against me.

"The foregoing statement seriously cast doubt upon my honor, integrity and reputation thereby gravely affecting my standing as an artist and talent manager.

"Moreover, the libelous statements had also affected my family and talents for it has caused dishonor and discredit upon my person and the talents who are associated with me.

THE CONSPIRACY. "On 01 February 2012, Ms. Asistio in conspiracy with Ms. Navida, caused the publication of the libelous news article in BULGAR.

TARNISHED REPUTATION. "As a result of the publication of the baseless, libelous and malicious accusation of Respondents that I was soliciting for prostitution respondent Asistio's sisters, I was bombarded by my talents, reporters and friends asking me to comment on her unfounded allegation.

"However, it is also worthy to emphasize that from the circumstances surrounding this present case, fair inference can be made that a categorical statement directly accusing me of engaging in soliciting for prostitution my talents, thereby evidently implying that I am engaged in an illegal activity.

"Because of the malicious attribution and implication that I was involved in an illegal activity, it is with no doubt that my reputation, honor, and virtue was tarnished and destroyed.

"Ms. Asistio's in conspiracy with Navida wanton disregard of the consequences of their statements is highlighted by the fact that she absolutely has no factual or legal basis to support her accusation yet she virtually caused the publication to the entire Filipino nation that I am soliciting for prostitution my talents.

"Thus, it cannot be denied that the publication of the libelous article by Respondents were made with evident intent of exposing me to public dishonor, discredit, contempt, humiliation and ridicule, to my great prejudice and detriment.

"One of our most guarded and valued rights is our freedom of expression, but the freedom to express one's sentiments and belief does not grant one the license to vilify in public the honor and integrity of another. A good reputation once lost is hard to regain.

TWENTY MILLION PESOS FOR MORAL AND EXEMPLARY DAMAGES. "It must also be underscored that such unwarranted insinuations case unwanted dishonor not only against my person but also that of my family.

"As consequence of the wide unabated publicity and sensationalism of these false, malicious, and libelous insinuations of Respondents, I suffered mental anguish, social humiliation, ridicule and embarrassment.

"Considering my personal and social standing, the Moral Damage I suffered is valued at not less that Ten Million Pesos (P10,000,000.00) which Respondents should be adjudged liable.

"Respondents should not be so coldhearted and careless as to expose innocent people with attacks and insinuations of a crime. Thus, Exemplary Damage in the amount of Ten Million Pesos (P10,000,000.00) should be also be adjudged against them.

"Considering that at the time I read the libelous article I was at my residence in Makati City, thus within the territorial jurisdiction of this Honorable Office."