Bela Padilla interviewed live by BBC; apologizes to those offended by her controversial FHM cover pictorial 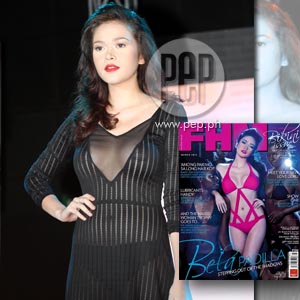 Bela Padilla's controversial cover photo for the March 2012 issue of FHM Philippines continues to become a hot topic that it has now reached international headlines.

The cover photo, which was immediately recalled by FHM Philippines, showed Bela clad in a sexy fuschia bikini and being surrounded by "black" female models.

International news agency BBC News picked up the ongoing debate and asked its subscribers whether the allegations of racism was intended on the photograph.

Facebook user Ruth Elias commented: "Definitely racist and offensive. The caption and the body language of the models says it all. They are all submissive."

Joanna Rimmer also posted a similar opinion: "I find it vulgar and yes, rather racist. Sick and tired of seeing women portrayed in this manner."

NO INTENTION TO DISCRIMINATE. However, in her interview with BBC News' Mishal Husain, Bela reiterated that the picture has no intention of discriminating any race.

The GMA-7 talent said, "I don't really have any idea that I would get such negative reaction.

"But I was proud with the cover we did because racism was totally out of our heads.

"So I didn't expect that we'd get negative feedback from it because we had no intention of discriminating anyone anyway."

Here is an excerpt of that interview:

Mishal: "When you saw that picture of you and the black model behind you and 'stepping out of the shadows,' it didn't ring any alarm bells to you?

"But if the people get to read the article there, then you would understand why FHM chose that caption."

Mishal: "Did you think when you, first of all, saw this, you were surrounded by black models, was there nothing in that thing that makes you think or gave you clues on how would this might end up?"

Bela: "You have to understand that we took the shot because it's my coming of age here in the Philippines.

"I'm an actress here and we're trying to change my image from the younger bracket to an older one.

"So they wanted to me to come into a 'coming of age' sort of article that's why they chose that caption.

"We weren't trying to hurt anyone from the caption."

Mishal also asked Bela about the negative reaction of some people to her controversial cover photo.

The Kapuso actress replied, "First of all, I wanted to say sorry to everyone who's offended by the cover.

"You have to see the article to understand the cover that we shot.

"Honestly, some of those girls were actually Filipinas painted in black, not to represent Africans, but we were really doing that to portray shadows because, like I said, it's my coming of age.

"They wanted a symbolization of me getting out of my old shadow. So, they were all supposed to represent me.

Mishal: "Some people might think that it would be more offensive that some people in that shoot, the Filipinas, were painted black."

Bela: "Honestly, when I see a black person, I don't initially think of a certain race because we also have black Filipinos.

"We didn't really think of harming anyone when we did that shoot. So, again, I want to say sorry to anyone who was offended.

"FHM has recalled the issue and we're releasing a new cover. So, I hope everyone will just forget about this."

When asked if she regrets doing the cover photo for FHM, the young actress' initial reply was: "Uhm, I honestly don't know how to answer that. I was just called for the shoot.

"I didn't have any idea that it would be blown up this big.

"I had no intention of hurting anyone neither did FHM Philippines."

Then, she added, "I actually don't regret it. It was a beautiful photo.

"But if it did hurt anyone, then I am sorry."

NOT EVERYTHING IS NEGATIVE. Mishal ended the interview by reading some positive comments from BBC's Facebook followers.

Shahbaz Ahmad wrote, "It's creativity! Not racist! If a black model is photographed with 2 white models would anyone call it racism?"

While Claudia raised a different concern: "The pictures are fine but the wording is insensitive."

Folasade Ogedengbe, on the other hand, had this reminder to other people who have seen the controversial cover photo: "Yes I can see why they'd think so but seriously, lighten up guys. Pun not intended."

A "BLACK LADY" REACTS. Meanwhile, a PEP reader also expressed her opinion, through e-mail, about the supposed cover of FHM Philippines March 2012 issue.

According to the letter sender, she is one of the "dark-skinned models" who was supposed to be on that photo shoot. But her participation on Bela's pictorial did not push through.

Sinoia said that, in her opinion, the photo was not racist "because it's art."

She added, "I even called my friend, who's the only black girl on the cover, [she] didn't find it racist as well.

"If ever there is someone/somebody to feel bad about this cover or call this offensive and racist, it's US, the black people in this country."

The rest of her e-mail reads as follows (published as is):

"Racisms againts us were strong, we experienced and still experiencing discrimination but not in this pigeonhole. People should open their eyes, do they see any black celebrity in this country asided from Jaya and Wilma Doesnt? How about black commercial model? Or the whitening soap they are endorcing? How about the billboards in EDSA, are there any black models?

"We have talents to showcase because we can sing, dance and act but we are hesitating because we are not sure that if this country is willing to accept or create their own version of Beyonce Knowles, Jay-Z, Rihanna, Nicki Minaj, etc! ? NO! If yes, why am I still here inside my cubicle working (if ever I don't have runway shows or photoshoots).

"There are so many issues about blacks to thrash out not just this one!

"I experienced everything - name it! You know why it's because I am black! Throwing stuff, "ipahabol sa aso", teasing me "negra, ita, kirara, ulikba, watusi..", "tignan ka from head to toe then tatawanan ka tapos pagbubulungan ka", madami pa jan but are these people even the media are aware of these issues?! I guess not!

FHM'S STATEMENT. Following the negative reactions about the controversial cover photo of FHM, the glossy men's magazine immediately decided to change the cover.