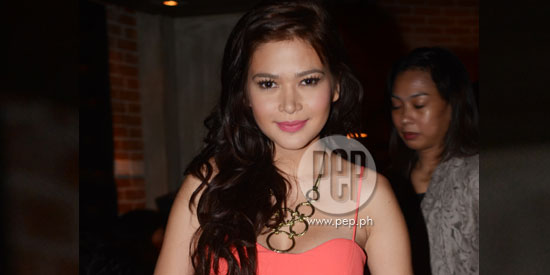 "I’m very happy with doing drama roles. Yes, that’s my dream. More than anything else. More than being known as someone who’s pretty or sexy, or ganyan. I want to be know as someone who can act,” Bela says.

Months after her initial cover for the March issue of FHM became controversial because of allegations of racism, Bela Padilla was able to turn the tides in her favor.

A week before the announcement of FHM’s 100 Sexiest Women in the World, Bela is now ranked 7th.

Last Wednesday, May 30, GMA Artist Center sponsored a night out for the 21 year-old actress together with Chariz Solomon at Relik Tapas Bar and Lounge in The Fort, Taguig, to boost the girls’ campaign.

Robin Padilla’s niece told us, “Actually, I was unaware of this. Parang last year I wasn’t able to campaign for myself.

“Kasi I didn’t think na, you know, it was possible for me to get to the top 10. Pero now that I know it is, I guess, yeah, it’s important for me and for other girls also.

“Kasi, I think the FHM Sexiest Campaign makes women feel sexy eh. And you know, parang, perople are voting for you cause they believe your sexy. So I want girls out there to feel that also,” she explained.

Does having a sexier image suggest that she is now ready for more daring roles?

“So, I’m willing to do something as long as their character really needs it. Pero, not yung you just do it for yung sexy na sake, you know. I want it to be part of the story.”

Instead, Bela would still want to portray characters that are “innocent.”

“You know, I want to do shows na parang, uhm, parang unang panahon. Yung mga, like what Jessie did, yung Sabel, parang ganun.”

“Like, story about a girl who’s innocent and pretty pero she’s not aware of it. Yung ganun. Tapos other people find her pretty and sexy, yung parang ganun.

And her dream leading man?

“I think… I’ve worked na kasi with Aljur. So… I know that Dennis Trillo is such a good actor. I wanna work with Dennis Trillo.”

Bela stressed that she doesn’t want to be known as just another pretty face but rather, as a dramatic actress.

We asked her to name actresses whose footsteps she would want to follow.

“I want to be able to portray roles as well as she did and does. Also, I love how Cherie Gil has changed the whole idea of a kontrabida, you know.

“And since I’ve been given kontrabida roles lately, I want to do something… parang, something to pattern what she’s done.”

Would she rather play bida or kontrabida roles?

“I enjoyed naman doing the kontrabida roles pero it was so heavy eh. Parang, it’s so hard to shift from a normal person mo, ganyan…

“So, yun, ang hirap lang mag-shift. So, as much as possible, I want to play naman roles na mabait again,” she answered.

Bela played the role of a kontrabida in the afternoon series, Sisid, opposite Jackie Rice. How did she prepare for her scenes then?

“I’ve been lucky enough to be, you know, be in shows where people I work with are very professional, so, that’s a big plus.

“Also, I prepare myself. I study my character. And I ask. I’m not afraid to ask people.

“So, I ask the older cast members or ask, even our EP or director…ask them, like, what do you think about my role, what do you want me to do?”

Of all the roles she has done so far, which one has been the most challenging?

“So, I think this is the most layered character I’ve played.”