THE PEP LIST: Ten Filipina actresses with the gift of ageless beauty 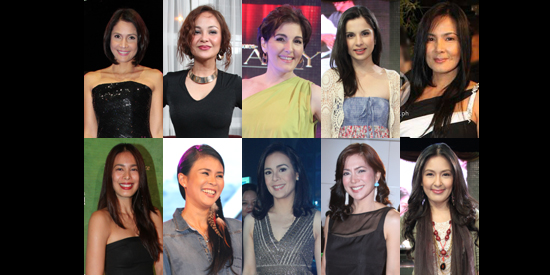 Stars come and go. When a new breed of stars arrive, it takes over the jobs of those who may have been at the height of their fame only a year ago.

In showbiz, longevity is the name of the game. It takes only one big break to rise to fame, but it requires talent, hard work, and persistence to stay in circulation.

But for some, the secret of their staying power is a timeless beauty, a gift given to only a fortunate few.

Age comes to play when casting for roles. But some women in showbiz have been blessed enough to possess faces which seem to ignore the passing of time.

These are women in their forties, but we make exceptions for three— two of them will be reaching the Ruby mark next year.

They are actresses who until now are still active in showbiz.

Most of them may be playing mother roles today, but they sure make motherhood look like a desirable state to be in.

Here are 2012’s ten women whose beauty makes them look like today is their first day in showbiz.

She is currently a part of ABS-CBN’s primetime series, A Beautiful Affair, in which she plays Natalia Saavedra.

At age 36 and one child later, Ana can pass for someone in her late twenties. Her fair skin and angelic features make her appear like she hasn't aged at all.

Better still, she behaves quite decorously in public—something that makes her the kind of beautiful star the industry needs as a role model.

ANGEL AQUINO. Angel will be turning 40 in February, but nowhere does it show on her face.

In 2006, she won a Cinemalaya Best Actress Award for the indie film Donsol, which was awarded Best Cinematography both by the FAMAS and the Golden Screen Awards.

Perhaps her most memorable character in a TV drama is her role as Vera Cruz in the primetime series Magkaribal (2010).

This year, she explored movie acting further with her inclusion in the indie film Captive, and the horror flick Amorosa.

Through all these character portrayals and more than a decade after she started in showbiz, this morena’s beauty has remained wonderful to look at.

Her slender physique also did not abandon her even after two kids, making her the envy of every mother.

GELLI DE BELEN. A child star, a precocious personality, a smart host, Gelli is even sexier and more attractive now than when she was single.

She is married to singer/actor Ariel Rivera, with whom she has two boys, Joaqui and Julio.

In 1995, Gelli won a best-actress award for her portrayal of the title role in the movie The Secrets of Sarah Jane: Sana’y Mapatawad Mo.

She is currently a part of TV5’s horror and suspense TV series, Third Eye, and a co-host of Game N’ Go and Face to Face.

Gelli has been blessed with a slim frame, which enables her to keep wearing young, fashionable clothes that make her look even more in tune with the times.

DAWN ZULUETA. She was born in 1969 as Marie Rachel Salman Taleon, but the time of her birth gave Dawn her famous screen name.

She has won several Best Actress awards in her career, including one for Hihintayin Kita Sa Langit (1991) where she starred opposite her former boyfriend, Richard Gomez.

The Dawn-Richard loveteam proved it still had the chemistry that audience go for when that film’s 2012 teleserye remake, Walang Hanggan, again starring them albeit with rising stars, became a hit.

Many of the teleserye’s viewers admitted that seeing the former couple back on screen was one of the big reasons why they watched the soap.

But in real life, Dawn is married to businessman Anton Lagdameo, and they now have two kids, Jacobo and Ayisha.

At 43, Dawn has maintained her timeless elegance.

ALICE DIXSON. Alice was born in 1969 to an American father and a Filipina mother.

She first shot to fame with a TV ad that captured her youth and bubbly beauty.

She moved on to the movies, gaining more fame with her portrayal of Faye, the fairy wife of mortal Enteng Kabisote (Vic Sotto) in the iconic fantasy-comedy, Okay Ka, Fairy Ko (1987).

Her current role in TV5’s fantaserye Enchanted Garden is reminiscent of her character Faye, as they are both mystical creatures.

Like a fairy, Alice seems not to grow old. She still has that sparkle that registers so well on both small and big screens.

Her career is also back in full bloom, as TV5 gives her one project after another.

Currently, Alice is working on the primetime drama Never Say Goodbye with Nora Aunor, Cesar Montano, and Gardo Versoza, which will air in 2013.

When asked about her beauty secret, her sensible reply was: “Actually I don’t have a secret, e.

JEAN GARCIA. Who would think that this slim woman already has an equally beautiful 22-year old daughter?

If you see them together on television, you might think that Jean and Jennica are sisters, until you hear the latter call the former “mommy.”

Who can forget her role as Madam Claudia Buenavista in one of our generation’s all-time favorite teleseryes, Pangako Sa ‘Yo (2000)?

And how many women past the age of thirty can pose for a men’s magazine? Jean did, with aplomb, when she graced the cover of FHM in 2008.

This year, Jean had several projects with the Kapuso network, including Alice Bungisngis and Her Wonder Walis, One True Love, and Tweets for My Sweet.

She is also currently a host in GMA News TV’s Personalan.

Despite a seriously good acting record, wrinkles and fine lines haven't registered much on this woman’s face.

A remarkable actress and a lovely mother, Jean Garcia is a star who is very put together at 42.

AGOT ISIDRO. After stints as a back-up singer in the Sharon Cuneta Show, she became a regular face on TV, courtesy of noontime show ‘Sang Linggo nAPO Sila.

She emerged as a sweet and refreshing face and soon became known as the “Crush ng Bayan.”

After several years in the Kapamilya station, she transferred to GMA-7 this year and has become part of such shows as One True Love, Manny Many Prizes, and Mariposa.

She was also a part of the films Ang Mumunting Lihim, One More Try, and the Metro Manila Film Festival entry Sosy Problems.

Always a fresh face, Agot still has that girl-next-door charm at 46.

EULA VALDES. More than ten years after Pangako Sa’ Yo, the face of Amor Powers as we’ve known it has remained the same.

Eula has starred in movies as early as 1983 when she did Bagets and would later become a part of Rosenda (1989) and Ang Pulubi at Ang Prinsesa (1997).

But it was not until the Kristine Hermosa-Jericho Rosales-led teleserye that Eula would solidify her reputation as a character actress.

And she's been with 32-year-old model Rocky Salumbides for four years now.

Possessing a perpetually glowing skin and maintaining her sexy figure, Eula is a bombshell at 44.

JACKIE LOU BLANCO. Who would have guessed that Jackie Lou Blanco is turning 50 in a few years?

Doubtless, this Spanish-Cebuana inherited the charm of her mother, Asia’s Queen of Songs Pilita Corrales.

Because of her prominent Spanish features, Jackie Lou is often typecast as a kontrabida.

She played the evil queen Ravenal in the film Magic Temple (1996).

This year, she was part of TV series Legacy, Kasalanan Bang Ibigin Ka, and Together Forever. She was also part of the Bea Alonzo-John Lloyd Cruz box-office film, A Secret Affair.

Jackie Lou is married to Ricky Davao. They have three children.

With a lustrous complexion and finely-chiseled features, this mestiza remains a sight to behold at 48.

AMY AUSTRIA-VENTURA. This list was supposed to be limited to women from the age of 40 to 50.

But an exemption was made for Amy Austria who doesn’t even look more than forty.

Born Esmeralda Tuazon, Amy decided to add her husband's surname “Ventura” to her screen name in 2011.

This critically-acclaimed actress made waves on the big screen as early as 1979 when she won Best Supporting Actress in the Filipino Academy of Movie Arts and Sciences (FAMAS) Awards for her role in Atsay.

In 2012, she played the antagonist Mildred Montereal-Gamboa in the Kapamilya series Lorenzo’s Time.

Not only is Amy a great actress, her face has also remained constant after three decades on screen.

Indeed, she is the personification of ageless beauty at 51.