Sam Milby lists the investments he has made so far: "Yung first time talaga was producing the first album of Quest, who's one of my friends. That was three years ago. Most recently, I also invested in Bamboo Mañalac and Yeng Constantino's By Request concert at the Araneta Coliseum. That was a different experience for me too. But this is my first venture sa food business," Sam shares in an interview with PEP.ph (Philippine Entertainment Portal)

At 29, Sam Milby has decided to channel his sense of adventure into the restaurant business.

He doesn’t claim to be a genius at it, but the actor-singer is lucky to have friends who can show him the ropes.

"I met the rest through Prost. These are friends and people that have more experience in restaurant business."

When the German pub concept was first presented to him, Sam admitted that it took him a while to decide whether he’d be in or not.

“At first, medyo I was like, ‘I dunno if I’m ready for that.’ Ako yung tipong kailangan mag-isip talaga.

"And I knew how competitive the restaurant business is, now especially. But, it’s more for the experience.

"I wanna do something different. It’s doing well so far.”

NEW PLACE TO CHILL. Located at the Fort Strip in Bonifacio Global City, Prost offers a nice change of pace from the usual loud restobars in the area.

It has a more relaxed sit-down dining experience, while still catering to party goers’ palate. 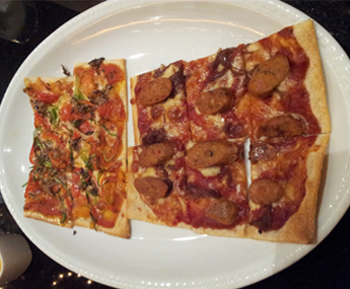 The menu includes a wide range of sausages, flat breads, and burgers that make a great match with beer.

Prost offers both German and local beers at Php180 to Php 250. 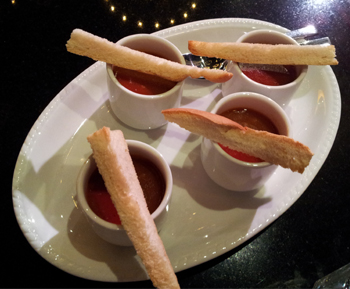 Diners who prefer a heavier meal, with their choice of beer or wine, can try the smoked salmon plate, roasted chicken stuffed with apple and sausage, and crispy pork knuckle with potato and sauerkraut. 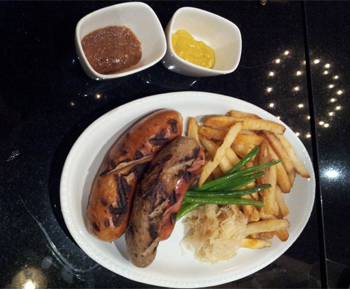 Sam revealed that he is not a beer drinker. “But it’s nice kasi all of my friends that come here, they say they love the beer.

"I’m more of a wine person. And I was with my other partners, we’re all together for the wine tasting. That’s what I was able to join for during the planning stage.”

Although Sam’s cutting down on pork and sausages to keep fit, he shared that he’s a huge fan of Prost’s Hoff burger, priced at Php380.

“German dishes kasi is puro sausages. And the one thing that I don’t eat is pork.

"There are actually a lot of other dishes here that are not pork. My favorite is the Hoff burger. I’m a beef eater talaga. Masarap yun.”

Although he’s more of an investor and has little to do with the day-to-day operations, don’t be surprised if you get to see Sam at Prost.

“I’m here a lot. It's not checking the progress of the restaurant. I enjoy being here nga, e.

"Even if I weren’t a partner in this, I like coming here just to chill and enjoy the good food.”

STARS WHO DROPPED BY. Among the celebrity guests who were spotted during the grand opening of Prost were John Prats, Isabel Oli, and Slater Young.

Sam’s new friend and apple of the eye Jessy Mendiola didn’t make it to the event due to her taping schedule for her new teleserye Maria Mercedes.

But Sam admitted that the 20-year-old actress had the chance to visit the restaurant during its soft opening.

“I have a lot of friends who come here. Jessy has been here.

"She likes the food. She’s not a beer drinker though. She’s more of wine rin.

"We were just a bunch of friends hanging out. Slater was also with us that time.”

“There's a lot from Star Magic because one of the handlers celebrated her birthday here.

"Last week I saw Robin Nievera. He didn’t know that I was a part of this. He really likes it here,” Sam added.