Anne Curtis belts out one of her favorite songs, "Alone" by Heart, in her new portable videoke device, which she thinks is the perfect Christmas gift for Filipino families.

86 DAYS TO GO. On October 9, Anne Curtis made a big announcement at the Amber Ultra Lounge in The Fort, Bonifacio Global City.

The actress-performer told media and guests, "Maybe this would be the best venue to announce it.

"Next year, I will have another concert in January!"

The 28-year-old star—who staged her first concert, dubbed Annebisyosa, in 2012—was just introduced as the endorser of a new portable karaoke device called Grand Videoke.

Anne swears, this is the perfect partnership as she had been a "pro videoke singer" since she was a child.

On being chosen as the product's endorser, Anne says, "I'm speechless!

"But I guess I just have to be thankful that they chose me.

"Maybe it's something that will reach out to those who are like me—that they're not necessarily a Regine Velasquez, they're not a Charice—but they love to sing their hearts out, regardless if they can sing or not, if they can carry a tune or not.

"So, maybe, I represent these people na talagang... they like singing in the banyo! 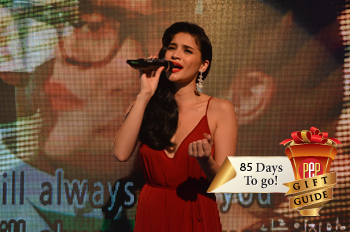 Indeed, Filipinos love to sing, which is why Anne thinks of this product as a perfect Christmas gift for the entire family.

The portable microphone has 5,157 built-in songs, which include popular tracks from the '80s, '90s, contemporary hits, OPM, classics, and even K-Pop.

Also in this list are Anne's top five karaoke songs: "Runaway" by The Corrs, "Alone" by Heart, "I Will Always Love You" by Whitney Houston, "Linger" by The Cranberries, and "Stay" by Lisa Loeb.

The device also has the capability to record songs, either on a USB flash drive or SD card, which can be attached to the provided slots.

It is the first of its kind in the country to be powered by an independent sound module, which allows it to produce high-definition audio.

Anne is particularly impressed by the real sound embedded in some of the songs.

"I don't mean to diss the older ones, but this one is really amazing because the music, the background, sounds so real.

Anne also likes the fact that the two microphone units, which are part of the standard package, each come with equalizer functions.

Grand Videoke can be purchased for the price of P 24,000, and is now available at Abenson, Astrovision, Odyssey Music & Video, SM Appliance Center, SM Music and Video Store, Western Marketing, and other music and appliance stores nationwide.