The Malaysian low-cost airline threw a Red Hot Party at the Mandarin Hotel in Kuala Lumpur, Malaysia, last Friday night, May 30, to officially launch the Airbus A320 with special livery featuring Taylor’s name and images.

“This is a very exciting event for us, probably one of the most exciting events for us here, whereby we’re flying Taylor Swift and her group of musician for her tour around Southeast Asia,” said AirAsia Berhad chief executive officer Aireen Omar after showing to the guests the latest addition to the airline’s extensive list of unique aircraft liveries.

In the press statement, she also mentioned, “At Air Asia, we’ve always taken branding to a different level and this opportunity to work with Taylor and her team marks yet another milestone for us as we continue to build the brand globally.”

Air Asia will be the official airline of the 24-year-old singer on her music tour in Southeast Asia. 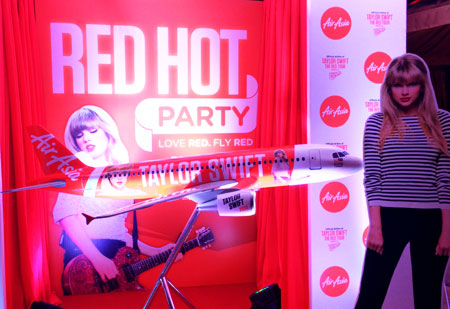