Actor and entrepreneur Marvin Agustin has made a name for himself, not just in acting but in the restaurant business as well.

Although he started out as a waiter, the actor now owns and manages several restaurants such as SumoSam, Marciano’s, John & Yoko, Mr. Kurosawa, Akira, Banzai, and Tokyo Grill.

Marvin shared his success story with PEP.ph (Philippine Entertainment Portal) and other members of the press at the launch of his latest venture, Alqueria Restaurante + Chocolateria, at SM Megamall in Mandaluyong City last October 17.

SHOWBIZ INVESTORS. First off, he thanked his business partners, some from showbiz, who helped him start Alqueria.

“Actually, I feel honored that they trust me and they've invested in my business venture. Nakakatuwa lang," Marvin said.

“Matagal na kasi silang nagsasabi na they wanna invest in some of our restaurants, so when we were conceptualizing [Alqueria], sabi ko why don’t we invite my celebrity friends to be part of this?

“Sila Ma’am Charo, sila Tita Malou, I actually just presented [the idea to them] on the phone."

Marvin is also in partnership with his other friends from the industry namely, Mylene Dizon, Agot Isidro and Liz Uy.

His father is very proud of his son's accomplishments.

“He’s very happy and once in a while, nakakasama namin siya sa restaurant,” the actor said.

SPANISH CONCEPT. Marvin’s other ventures are mostly Japanese restaurants. This is his first Spanish restaurant. He said his recent trip to Madrid became his inspiration for Alqueria. 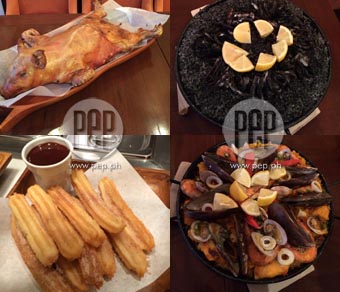