HAPPY ANNIVERSARY. A year has passed since friends Bea Soriano, Georgina Wilson, Martine Cajucom, and Eric Dee Jr. launched their own eyewear brand Sunnies Studios (formerly known as Sunnies by Charlie). The group opened the Sunnies Studios outlet at the SM Mall of Asia in 2013, bringing to 25 the number of the brand's stations around the country. They also plan to open five more kiosks in Iloilo, Boracay, Clark, SM North EDSA and Cebu.

Trust me, we're all still recovering. See more shots on what so many people have said was the "best party ever!" on facebook.com/sunniestudios

For the brand's first anniversary, the founders hosted a pool party at a house in North Forbes Park. As expected, it was attended by the most stylist people in the metro. The party overflowed with drinks and sweets including doughtnuts, candies, cakes, and cupcakes. The guests were also treated to nitrogen ice cream from the Food Hall by Todd English. Burgers and fries were also some of the grub the guests enjoyed.

We seriously have about a thousand photos to share! Still on a high from Sunday! Don't mind us over flooding your feed. #sunniesbday

Guests left the party toting bags personalized by their faces drawn by caricature artists Pete Rich and Rob Cham. Of course, they got to take home their favorite pair of Sunnies Studios eyewear too.

OPEN YOUR WORLD. Yamaha Motor Philippines Inc. continues to inspire with its “Open your World” campaign that encourages young people to break out of their shell and come up with "out of the box" ideas. 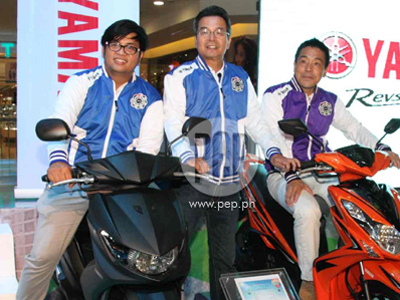 The executives talked about the details of their campaign to incite passion among the youth. They discussed as well the competitivement of the brand in the Philippine market.

Joyce Pring hosted the program and introduced their new models: Mio Sporty, Mio Mx I, Mio Fino I, and Mio Soul I.

The University of the Philippines PEP Squad performed an exciting routine inspired by their Equality-themed UAAP Cheerdance 2014 performance. After which the winners of the Mio Graphic Design Contest were announced.

Talk Back and You’re Dead star Nadine Lustre ended the day with her performance of “Mr. Antipatiko” and “Para-paraan” from her self-titled debut album. 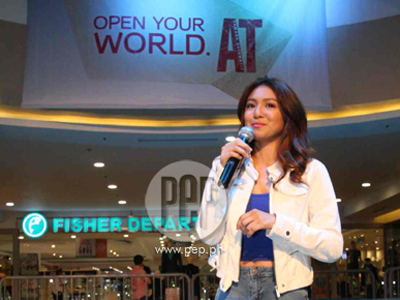 Asked whether she drives a motorbike, Nadine said she doesn’t because she’s scared. However, the singer-actress is open to learning how to ride a motorbike if Yamaha would invited her to be one of its endorsers.

UAAP fans got the chance to meet collegiate players Brian Cruz from FEU; Ralph Tansingco and Ralph Diputado from NU, and Alex Barera from AdU, and Jeron Teng of De La Salle U.

Ending the three-day event was a performance from Up Dharma Down.