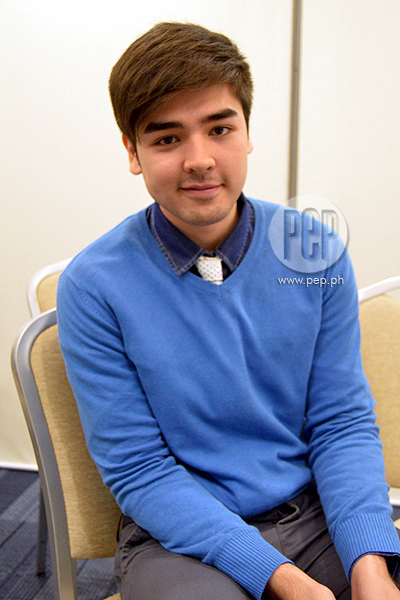 Andre Paras is on the ball in his endeavor to become a role model for the youth as an athlete, an actor, and a conscientious citizen.

Nineteen-year-old Andre Paras is a young man on the go. He currently plays for the San Beda Red Lions basketball team, has starred in a number of television series, done movies, and hosted variety shows.

And recently, he snagged another endorsement as the new ambassador of Globe Telecom for its prepaid brand.

PEP.ph (Philippine Entertainment Portal) and other members of the press had a chat with Andre at a pocket press conference held at the SMX Convention Center last November 29.

In his view, he told the media, the company has added him to its roster of celebrity ambassadors because he's the kind of person "who likes to explore things or innovate."

Like, as a basketball player, "I didn’t stop there because I wanted to go into acting."

And then, “It didn’t stop there because I wanted to go into hosting.”

And now as a brand ambassador, he hopes to be doing more than just endorsing a product.

“I’m really happy that at the same time, I get to be a role model," he said.

That's important to him not just because the kids and the young adults can relate to him but also, "You know, no hating, they just want to know what’s new and it’s good I’m able to give them that.”

PROJECT 1 PHONE. Andre also expressed pride in being part of the One Phone charity campaign of Globe, which promotes correct disposal of electronic wastes for environment safety.

He explained, "It’s all about recycling your old phones and gadgets.

“For example, those wastes such as batteries and plastics, what Globe does, they’re going to recycle them.

"They will be recycled into other materials, and we’ll be able to sell them."

Being young himself, Andre is motivated to inform the youths, the biggest consumers of electronic devices, how they can contribute to clean environment and public health simply by disposing e-wastes properly.

“It’s such a simple thing and, hopefully, I encourage people to donate their phones already… instead of disposing your phones somewhere else and just harming our environment," he said.

Andre also explained that the proceeds from the sale of recycled goods will help fund the schools that the company is building in Aklan, one of the provinces in the Western Visayas devastated by Typhoon Yolanda.

"It's good really," he said about the campaign. "It will help build schools and also save our environment."