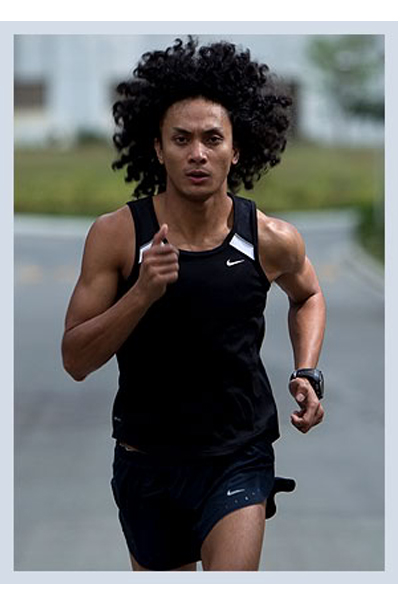 Running coach Rio: "I'm here to share my passion to them and also my knowledge and also to encourage runners to have a healthy lifestyle.

At the opening of Noel de Paris at Le Bar in Sofitel Manila on November 25, 2014, RunRio Inc. turned over a brand new van to the Virlanie Foundation—a private, non-profit organization reaching out to street children in the Philippines by providing shelter and education.

Virlanie has been helping indigent children to become responsible and independent to assure them of a brighter future.

The donation was made possible by the proceeds from Sofitel Manila's half-marathon last August 2014.

Rio dela Cruz who attended the turnover to represent RunRio Inc. remarked that he felt "fulfillment and pleasure from doing the event as part of our CSR [corporate social responsibility] and given the success of the event and the proceeds we already raised," they hope to do it for the third time next year.

Rio recognizes the impact this community of runners has made on him, "especially my sports, track & field because if not for them, I'm not Coach Rio."

He continued, "I finished my education through running and this is just giving back to the sport that I love and provided where I am now, so organizing races is always my passion. '

"I'm here to share my passion to them and also my knowledge and also to encourage runners to have a healthy lifestyle.

"We will keep doing events like this and hopefully outside the Philippines."

BACKTRACK. Rio has been organizing races since he finished his physical education degree from UP Diliman in 2007.

Back when he first started organizing races, Coach Rio recounted, "My first event only had 1,888 participants!"

He attributed the steady rise of runners through the years to at least two things: 1) because of the support of health conscious participants, and 2) a lot of celebrity personalities getting attached to his name and the races he organizes.

He also remembered that back when he started, "The roads not's closed. And then the water they are serving is tap water. It's like a frustration to me.

"So I told myself, I can do something to make this sport better. I'm happy na I'm part of it so hopefully, my next plan or dream is to improve or increase the sports of track & field."

RUNRIO'S TURF. While the duathlon and triathlon along with Iron Man-themed races have also been steadily gaining attention and a community of steady participants, Coach Rio said RunRio Inc. will stick to what they know best.

"My principle is I will only do events that I am capable of. I'm a runner so that's my field. So I'm not a triathlete so I will not organize a triathlon. And also because we have a lot of races every year.

"If we venture into triathlon, we don't have enough time to organize it. We just focus on running because that's our field."

He also thanked the celebrities who helped build his credibility and good standing in the industry.

"I owe it to some of my celebrity students when I organize races. They became my marketing like si Tricia Chiongbian, Fernando Zobel, I coached them.

"A lot of people, they notice me, word of mouth, that's the reason na lumaki yung community."

Instead, he chooses to hold running clinics where, "we can cater to more people."

"So I just really want to be fair. No individuals, at least group para I can help more.

Coach Rio ended on a positive hopeful note, "We will continue organizing races but we want to expand outside the Philippines.

"But the main objective or reason for that is to get runners from other countries to join our races here in the Philippines so that we can promote our beautiful country.

"I want to promote sports tourism."

He will continue to pour his 100% in these races, "We invest more giving them really good experiences during our races because if bad experience kasi, they will not continue.

Whether or not celebrities will continue to support him is not his main focus anymore.

"It's not more on the names, it's more on helping them. Whoever na celebrity or kung sino man ma-inspire ko or mayroon akong time na maturuan ko siya, I'm open.