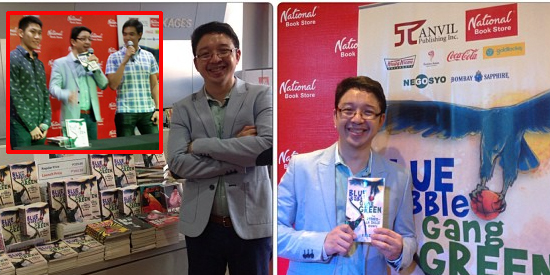 "I stayed a writer," RJ Ledesma says when someone pointed out that his books went from wholesome to not so wholesome and now back again with his latest, Blue Babble Gang Green, published by Anvil Publishing.

His latest book came to life when RJ met with Anvil Publishing's Karina Bolasco and Gwen Galvez this year.

He recalls, "They were asking me what I can write about now since I was working on several books.

"'Do you wanna do a travel book? Do you want to do a book on health?'

"And I go, I got this book but it's a bit too personal for me to put into essay form..."

The TV host/ author/ event host/entrepreneur told them how he has been putting together his essays on the Ateneo-La Salle rivalry, and how "it was actually very difficult for me to write about the rivalry because I am a third-generation La Sallian and I'll probably have a fourth-generation running around."

As he was completing research and background information for this book, RJ looked into his family history and discovered, "My great-grandfather went to Ateneo!

"Upon further inspection, there was no La Salle yet in the country when he was studying so..."

Even as he struggled with the subject matter, fearful at every turn of letting his personal bias affect the material, he shares what sealed the deal for him to write his first essay.

He recalls, "I have to absolutely write about the Ateneo-La Salle rivalry," after watching a specific game in the 2006-2007 championship season.

He adds, "The year before, La Salle had been disqualified by the UAAP from playing anywhere.

"So from zero, we entered into a very, very tough semi-finals with our friends from the other school.

"I remember that very, very well. Two former varsity players from Xavier, both teammates in high school and then collegiate, playing for different sides...

"Ateneo lost that time, but I remember the coach of UE said that Ateneo brought out the best in La Salle, I was very inspired by that."

INSPIRATION FOR HIS LATEST WORK. The two former teammates RJ was referring to were Green Archer Ty Tang and Blue Eagle Chris Tiu.

During the recent book launch of Blue Babble Gang Green at the National Book Store Glorietta 1 in Makati City, RJ invited the two former collegiate MVPs who are now teammates on the PBA team, Rain or Shine.

He confesses, "I am very honored that they are here, I had to really get down on my knees to get them over here."

He reveals that Ty Tang and Chris Tiu were the reason he felt so strongly about putting down his thoughts about the rivalry. "These two gentlemen were my inspirations for my very first La Salle-Ateneo essay, and I have high regard and respect for both of them because I think they are the embodiment of great sportsmanship, of great integrity, of great attitude.

"They showed the way. Despite coming from [rival] schools, they both brought out the best in each other."

MORE ABOUT THE RIVALRY. In his other essays, RJ tries to explain why basketball has become the be-all and end-all of both schools.

The rivalry has fueled such passion from both schools, the UAAP games are a sell-out when it's an Ateneo-La Salle game. Even non-blue and non-green students watch the game.

Blue Babble Gang Green has various theories on when and how the intense competition between the schools started.

In one essay, RJ recounts the 19th century controversy between the Jesuits and the Christian brothers, the two largest teaching congregations in the Catholic Church of America.

This ugly situation spilled over into the campuses of Ateneo de Manila and De La Salle University, most likely heralding the start of the blue-green rivalry that we know today.

OTHER BOOKS. RJ came out with his first book in 2007, Lies My Yaya Should Have Told Me: RJ Ledesma's Imaginary Guide to Whine and Women.

The collection of 25 essays was reprinted within a month of its publication. RJ recalls, "When I first saw my name out there and in the Philippine Publication Bestsellers' List, I really thought this was the pinnacle of what I wanted to do."

He continued to write for the Philippine Star in his Sunday column, Pogi From A Parallel Universe, eventually coming out with what he calls his love letter to wife Vanessa in his 2009 book, I Do or I Die: RJ Ledesma's Imaginary Guide to Getting Married.

His third book published in 2010, Is It Hot In Here or Is It Me: RJ Ledesma's Imaginary Guide to Flirting, Body Language and Pick-up Artists, earned him a National Book Awards Finalist nod. He couldn't believe it, he shares.

He came out with his fourth book in 2012 because "I wanted a book that was a bit more decent and something I could share with my son."

RJ reveals a simple writing formula: "I have seen people choose their area where they really wanna put their creative juices in terms of writing.

"Me, I chose to put mine in the form of comedy writing and that's why I enjoy doing it."

He keeps a common thread going, "In doing so, I try to create a character—sometimes self-deprecating, sometimes may yaya, medyo bastos nang konti.

"That's really the character you try to create. It resonates with people, then people can understand who you are and they get attached to the character, and that's what I really like."

RJ shares it was after reading Jessica Zafra that he was inspired to write a book.

"When I read her, since I read her weekly then suddenly here's a book, it opened up in my mind to the perspective that, 'Wow, you can put together your columns and make it into a book.' And that you don't have to be serious all the time, you can be funny, you can be enjoyable."

The important thing RJ remembers is this, "Am I writing to hit a deadline or am I writing for a book? That changes your perspective and effort and craft you put into something."

So he's gone from flirting to dating to marriage to crazy things like pink parts, which RJ calls "a journey."

"It's nice because people are journeying with me and it gives them a sense of familiarity when they read my work."