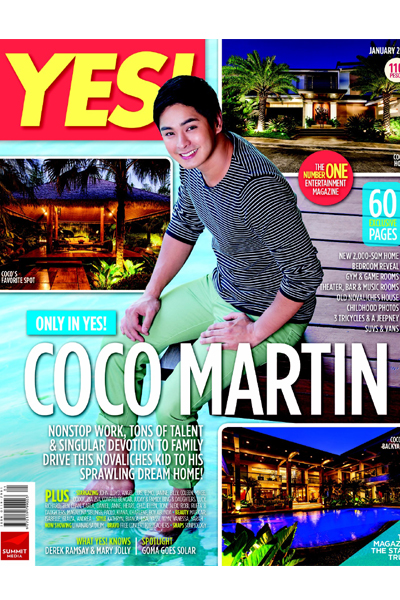 For the first time, Coco Martin opens the doors to his 2,000-square-meter sprawling new home in Fairview, which took three years to build.

The Kapamilya actor tells YES! magazine that it is the result of all the hard work he has done in show business for the past 10 years.

It is a symbol of how far he has come, from struggling actor to A-list star.

Coco wanted to make sure that the construction of his home wouldn’t put an enormous strain on him, whether financially or emotionally.

He didn’t want the stresses of paying off a debt.

The solution: Coco accepted all the projects offered to him so that he could fund the construction debt-free.

Coco also gave YES! a tour of his old home in Novaliches, showing us the simple two-bedroom bungalow he grew up in.

“Three years ago lang ako lumipat,” he tells us.

Until 2011, he was living in his grandmother’s modest house even though he had already appeared in high-rating ABS-CBN teleseryes such as Tayong Dalawa (2009) and Kung Tayo’y Magkakalayo (2010).

The talented actor also showed us the jeepney and three tricycles that he bought when he was just starting in show business.

He was also able to buy a jeepney, but not without Herculean effort.

He recalls needing just P100,000 more to get the jeepney for his father. At that time, he was already appearing in a teleserye on ABS-CBN.

When we asked Coco what he had to do in Ilocos to get the coveted one hundred thousand pesos, he said, without missing a beat, “Debut! Kakanta po sa debut! After that, pagkakanta ko sa Ilocos, alis na ulit kami. Palitan ulit kami. Awang-awa ako sa sarili ko.” Then he laughs.

Coco shares more stories about his humble beginnings, his career highs and lows, and his personal life in the YES! January 2015 issue.

PLUS: Derek Ramsay and his ex Mary Christine Jolly talk about their legal woes, Richard Gomez shows his recently-installed solar panels in his new home, Piolo Pascual runs for SunPiology, and more!