James Reid in quandary over Christmas gift for Nadine Lustre, "She has everything she wants." 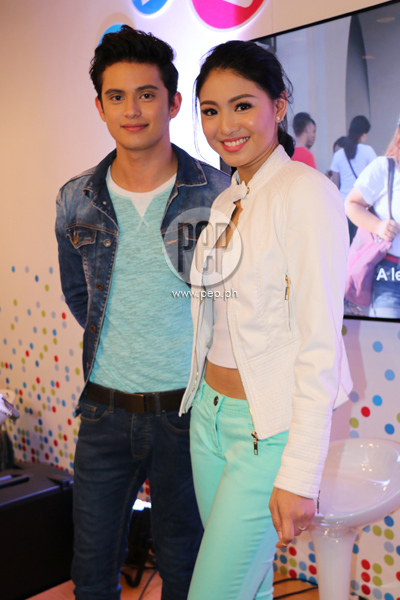 Both James Reid and Nadine Lustre answered “family” when asked about their concept of Christmas. He added, “Gift-giving.” She exclaimed, “Food!”

For James Reid and Nadine Lustre, one of stardom's of busiest loveteams, Christmas this year means making up for lost time with their respective families.

Nadine explained, "At home, traditional Christmas dinner lang because I have been gone like most of the year.

James, meanwhile, related, “My family is coming from Australia this year.

FAMILY TRADITIONS. It’s been customary for the young actor to visit his relatives on his mother’s side in Cavite.

Nadine, however, usually stays in Manila.

“My dad cooks. He's good, really good at cooking. I always look forward to that.”

The two also does something good.

James also associates Christmas with “family and giving back.”

The Pinoy Big Brother Teen Clash winner related that he had just been at the Philippine Children’s Hospital for a charity event.

For Nadine’s part, she donated toys to Gawad Kalinga.

"For me, it feels better na if I give them my old toys na... parang it's like Toy Story na toys ko will have a new home instead of buying new ones.

"I have this little doll from an airline, Cathay Pacific, sobrang tagal na.

“His name is Bobby. He is a tourist. He has a camera, and he is wearing a cap, the usual turista outfit, yun.

“I gave him away… this year lang, yung huling charity na ginawa ko.”

CHRISTMAS MEMORIES. Nadine can't pinpoint a memorable Christmas as it has always been her family.

As for James, “It would have to be last year.

“We went to our native hometown, the hometown of my mother.

“And that was with my family.

“We went jumping off waterfalls, which was more like an adventure type of Christmas.”

GIFTS. James recently bought himself an Audi R8, while Nadine had their house fixed.

She said their house is "kinda old, it's been there since 1970s so I'm having it repaired.

"And I'm giving myself my own walk-in closet. I am designing it, I'm excited!"

How about her gift or wish for James?

"Wish for him? Siguro to stay the same, yun lang naman.

“Wish ko? Happiness for him, yun lang. As simple as that."

At the time of the interview, James was still deciding what to give his screen partner.

“If I’m gonna give something to Nadine, it’s hard.

"I mean, she has everything she wants. Family, friends, everything’s going great. Maybe…I don’t know!”

“Can't think of anything, world peace siguro, for world hunger to end.

"Parang I don't want... that's why, the reason, I am donating toys din.

“Christmas kasi is about the kids, it's for everyone.

"I feel bad for the kids who are not, who don't get anything for Christmas."